The celebs took to their respective social media pages to speak out on Bowie’s impact on them.

David Bowie was a true innovator, a true creative. May he rest in peace ?? #RIPDavidBowie

MESSAGE FROM IGGY:
"David’s friendship was the light of my life. I never met such a brilliant person. He was the best there is.
– Iggy Pop"

The legend that pushed all the boundaries so that artistic freedom of music, style, fashion and life were at the discretion of that artist

My condolences to the family of The Legendary artist David Bowie may he he rest in peace! Here's a flashback in the 80's during MTV's Rock and Comedy Concert – Backstage at Battery Park in New York … #davidbowie #davidrobertjones #ziggystardust #thinwhiteduke #whoopi #whoopigoldberg #music #mtv ?

Check out Kanye West’s reaction to David Bowie’s passing on the next page.

A statement on the singer’s unexpected death surfaced on his Facebook page early Monday (January 11). 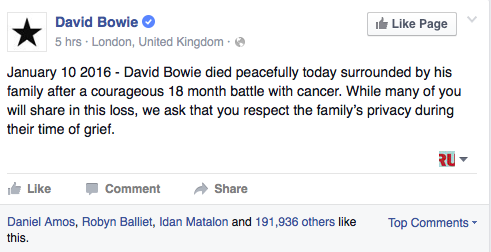 Very sorry and sad to say it's true. I'll be offline for a while. Love to all. pic.twitter.com/Kh2fq3tf9m