Oprah Winfrey To T.I.: “You Don’t Know What You’re Talking About”

Television icon Oprah Winfrey has shared her reaction to hip-hop star T.I. recently saying he would not vote for a female president.

Approached by a paparazzo Wednesday (October 14), O did not hold back her feelings on Tip’s comment.

“Nobody said that!,” Oprah initially said when told about Tip’s remark. “Oh Ok. You know what I say to that. I wanna say, honey child, hush your mouth. You don’t know what you’re talking about. That’s what I would say. [He apologized afterward,] I know. No, I don’t buy it, you know it’s not true and I think people just like to talk.” (TMZ)

Find out what T.I.’s wife Tiny said about his comments on the next page…

Instead of taking offense to Tip’s comments, the rapper’s wife Tiny said she believed his words came from a caring place this week.

“Um, no, I’m not disrespected because I know him, I know who he is so either way,” Tiny told a paparazzo. “I think it was not tasteful but I definitely think, I’m not disrespected because I know the man he is. [Is he a sexist?] Sometimes. Sometimes. But he just lives in the old man, man take care of woman, chivalry-type thing. I didn’t hear it but I would hope he’s joking. He might have been thinking about me at the time. He just wants to be the man. He wants to take care of everything, he wants the woman to be a woman and treated like a princess. Sometimes I do [agree with that], I can’t say I don’t. But I also think a woman has the right to do just as much as the man.” (TMZ)

Tip sent an open apology to anyone who took offense to his comments on Twitter Tuesday (October 13). 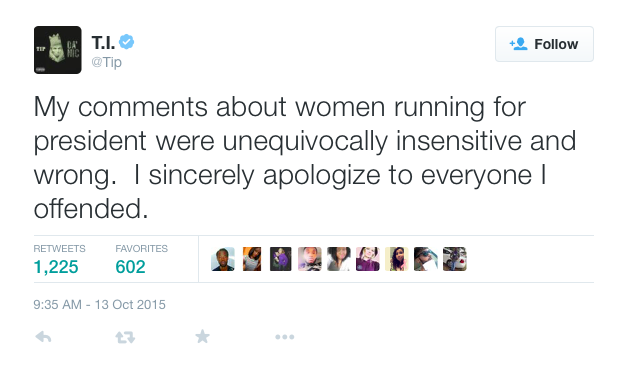 In the new interview, Tip explained his problem with voting for a female president.

“Not to be sexist, I can’t vote for the leader of the free world to be a woman just because every other position that exists, I think a woman could do well, every other position, but, as president? It’s kind of like, I just know that women make rash decisions emotionally and later they make very permanent, cemented decisions and then later, it’s kind of like, it didn’t happen, they didn’t mean for it to happen. I sure would hate to set off a nuke because a motherf*cker, oh my God, you know what I mean? You’re not going to be able to form foreign policy. The world isn’t ready yet. I think you might be able to get the Loch Ness Monster elected – it’s not right, I’m just saying, I don’t think.” (“Whoolywood Shuffle”)