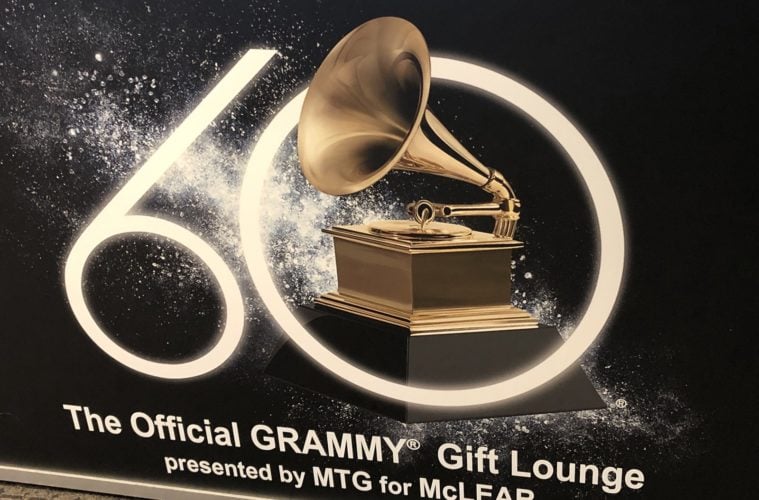 The Grammy Awards ceremony is officially back in New York and SOHH couldn’t turn down the opportunity to check out the official Grammy Gift Lounge to see what everyone’s favorite nominated artists from JAY-Z and Kendrick Lamar to Bruno Mars and SZA are getting this year. We came across brand ambassadors, spoke to creators and were blown away by this year’s line-up. Peep below for a look at each brand, what their on-site reps had to say and feel free to hit them up to grab your own!

Our offices are based in Manhattan on 40th and Park. I want to see everybody with this but it’s important to say Tanzanite celebrated its 50th anniversary last year so we want to get the brand awareness out there and get it on major celebrities – Rihanna, Beyoncé. Look at the blue, Blue Ivy would be great in this.

This is for the everyday man, celebrity, corporate worker. We’re based out of New York with our office at the Empire State Building. We cover worldwide airports whether you’re coming into Los Angeles International Airport or London’s Heathrow airport. We’re able to expedite you through customs and avoid paparazzi. We’ve been around 11 years. It started out very, very discreet, referral-based but we’ve grown and branded. A lot of our clients are Grammy award winners so we feel responsible for giving back with this gifting opportunity. In addition to airport VIP service, we also offer ground service which is here today through the weekend and we’re shuttling people to and from the venue. The talent is being gifted with this lovely box which comes with a gold card and behind this gold box is three digits. That’s your account number. With that number, you simply e-mail us with it and you’ll receive either an airport greeter or airport transferer.

We’re Fingerlings and we’re from WowWee which is a toy company. Fingerlings were the hottest toy of the holiday season last year and they were sold out everywhere. People were fighting over them. Now they’re back for the new year and they have even more friends. We’ve brought in unicorns. They’re super fun. They’re interactive pets. They burp, fart, sing, laugh. They’ve only been around since last August but they exploded and become popular everywhere. They’ve been mentioned in People Magazine as a top fad of 2017 because they were everywhere. So for the Grammys, we wanted to do something special so we partnered with an artist named Michelle Elaine from Popline Bling and she hand-bedazzled these. They’re only for Grammy Awards talent and media. You can only get them here. We’re based out of Montreal, Canada and Michelle comes from Cali.

Sixth Sense Lab has been around for 10 years now and we’re based in Japan. We want all the men and women in the world to feel healthy. It’s very simple, we have this detox treatment that detoxes your entire body. You take four tablets a day and all the toxic things go out and you start to feel better. In Japan, this became very popular. It’s all natural and it’s a boom now. We’re looking for distributors and our next step is getting this out to everyone. We also have a sleeping pill. You can take it about three times.

We’re a non-smoking brand and we’re trying to use tools to make people make their own decisions. So we’re giving them facts to help them kick the idea of smoking. We partnered up to create these awesome custom guitars. We’re giving them away but we’re asking the celebrities to donate it back because we’re going to be mailing them out to schools in low-income communities because our program really focuses on those neighborhoods. We’re rolling that out on the night of the Grammys. Everyone gets a guitar and most times they give it back and sign it. If they decide to donate the guitar, we also give them a truth bag which comes from Sprayground.

Over here at Smile Direct Club, we create custom, invisible aligners that are mailed directly to you. So the only time you have to actually go into a store or deal with anyone is if you go and get your teeth scanned. This is a machine that takes thousands of pictures were second. It creates a model of your teeth and smile. So we’re actually gifting aligners and a white-on kit for Grammy talent. We’ve been around for about three years and we’re growing insanely fast. We’re opening a ton of places in the West Coast. It’s 50 percent cheaper than Invisalign. It’s for both people who never had braces or maybe started with aligners and then stopped. There is a monthly plan or you can pay all at once. It’s insanely affordable and can be for anyone. You never have to go to a store because everything is sent directly to you at once.

We are Grosée and we have a variety of jewelry options. We have just launched a men’s line of jewelry and these are really all gender-free. Both men and women can wear it. It’s made of silver. Last year, Bruno Mars wore some of our golden pieces. We really likes gold. There are six ways you can wear some of these pieces.

This is called the Lumi Diet and we use LED lights to burn fat cells around your stomach. You won’t really feel anything, it’s very light. You’ll feel a little warmth. If you like to work out, we recommend using this before you work out. You would wear this underneath your shirt. It targets your fat cells and burns particles. This makes it so when you work out, it burns a lot more. The Lumi Diet is not in the United States but we’ve started in the Korean market and some South Asian places and it’s been great. It’s been a year since we launched and the numbers have been great. One session is about 30 minutes. So we say twice a day, maybe in the morning and then at nighttime. You can even wear it while you’re doing yoga. By the end of the year, we should be able to target the US market. One unit each will be gifted to the Grammy talent.

Stands is all about targeting celebrities, athletes, musicians and we do positive causes. So the celebrity has a charity or a charity they would like to work with and we do a deep dive on their social – find out who their followers are and their fan base to see what are their interests and price range. We create a piece of merchandise, it can be a shirt, jewelry or anything they’d like it to be, put it on their social, they give a portion of the proceeds to the charity and keep the part they would like plus we also donate 10 percent and take a huge risk. We have been around for two and a half years.

Happiest Tee is a luxury t-shirt and it is all made in America and it’s all about what makes you happiness. A lot of times it could be where are you happiest and we’ll come up with a location like Los Angeles or New York. So we’re giving one of these away and it’s made Oprah’s Favorites list and it’s so delicious. We have these candles that are customized for New York. Chelsea is very sweet. Upper Westside is a little naughty. Williamsburg has a little tobacco and it’s risky. Just imagine this for Valentine’s Day. All of the t-shirts, the entire line, are online and we’re Los Angeles-based.

Solstice is a multi-branded store. We have our Polaroid sunglasses line which we’re trying to build some momentum on. When you think of Polaroid, you typically think of the camera so we’re showcasing that. It’s a great polarized lens and what we’re doing for everybody who comes in here is a special promotion. If you’ve been gunning for a pair of Tom Ford or something fancy, we have a promo deal. We are essentially the inventors of the polarized lens for eyewear. These all have great UV protection.

Oxygenetix is a great makeup and skincare product. If you have sensitive skin, it will take care of you. This is a good, clean healthy option for when you’re putting on makeup. Kourtney Kardashian recently just posted about us for free and it cleared up her acne. She requested some for Khloé about three weeks ago and then I think Kendall wanted it. It works. There is the daily Oxygenating Hydro-Mask which keeps you healthy and there all the time. I throw it on in the morning and then again at night. Let it keep working. It’s not going to run down your face and it’s clear.

Fashion and technology brought together to form smart rings with contactless payments, a next generation consumer platform for the IoT world.