On Wednesday, Genasis went to Instagram to reveal his potential plan.

Hours prior, O.T. broke the hard news about YouTube taking down his new anthem.

A few nights ago, rap star 50 Cent shared footage of himself turning up at a concert with O.T’s record playing.

Last week, O.T. shared footage of people getting lit to his record at a house party.

I wish I was at this house party ♿️

All I want for Christmas is my duet ♿️ @keyshiacole 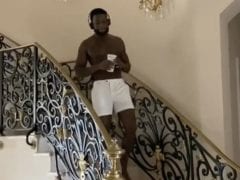