Thriving Thursday. It’s a day to thrive so why not get things started with Nipsey Hussle scooping up Lil Wayne‘s ex-girlfriend? Speaking of ladies, did Kim Kardashian and Kanye West get extra freaky back in the day? With Kim K still on your mind, are her new pics photoshopped? All this coming up in SOHH Whatcha Think.

We’re all waiting to hear what new music Nipsey Hussle has on deck but in the meantime it looks like he’s getting extra cozy with the one and only Lauren London? His Instagram page tells it all:

Is there any reason to start speculating or is this just a case of good friends hanging out? #SOHHWhatchaThink?

What went down with Kanye West and Kim Kardashian back in the day? Is there any chance they were getting extremely freaky with one another? RadarOnline has a wild scoop: Though the reality star’s rep denied the tryst, In Touch claims that multiple insiders dished on how Kardashian cheated on a longtime boyfriend with Kanye, 37, and another woman who just happens to also be famous. “Kanye was obsessed with Kim and wanted to have a three-way with her, and she didn’t hesitate,” said one source.

“Kim and Kanye had already been seeing each other behind her boyfriend’s back, and Kanye brought this other woman into it.”

The only problem? “The other woman ended up getting jealous of Kim because Kanye was more into Kim than he was into her,” says the source. (Radar Online)

Could the other woman have been Amber Rose? Is there a chance this could be the case? #SOHHWhatchaThink?

3. Proof In The Pudding

Is there any doubt there was some major editing done to Kim Kardashian’s Paper Mag cover? That appears to be the case. RumorFix has the skinny: 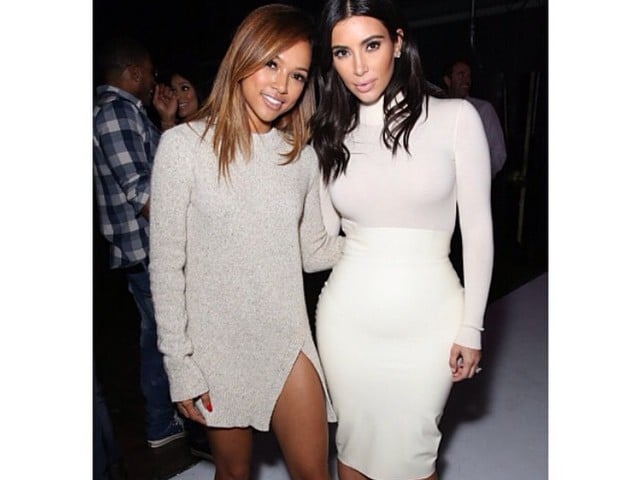 It doesn’t even seem necessary to defend the fact that KK’s pic was photoshopped–anyone with decent vision could tell.

But RumorFix dug up a photograph taken of Kardashian just four months ago that proves the fame monger’s waist is NOT as small as it’s portrayed on the magazine cover, and better yet, her behind is NOT as perfectly round and plump as it appears either.

And in June, these photographs hit the web showing Kim with large amounts of back fat rolls, so unless the Keeping Up With The Kardashians star went under the knife to get rid of the extra lard for the shoot….photoshop, photoshop, photoshop!

So, don’t get too excited, because that extra lubed large plastic thing coming out of what looks like it could be a trash bag, is not Kim K’s bootay. (RumorFix)

But does it really matter at this point? #SOHHWhatchaThink?

That about does it for today. This is SOHH On The Spot giving you the morning scoop from your favorite gossip sites.