Rolling Stone Names The Best Rap Album Ever 35 minutes ago
MoneyBagg Yo Responds to Las Vegas Birthday Shooting 48 minutes ago
Ari Gets Moneybagg Yo a 2020 Maybach for His Birthday 1 hour ago
Trayvon Martin Trends on Twitter After Kyle Rittenhouse Was Called a "Little Boy" 1 hour ago
BREAKING: Kentucky Grand Jury Indicts Ex-Police Officer In Breonna Taylor Shooting 2 hours ago

Young Money‘s Nicki Minaj is counting down the days until she invades New York. The curvy hip-hop star has confirmed her performance at the upcoming TIDAL X concert.

Nicki jumped on Instagram Thursday (September 22) and hyped up the upcoming star-studded event. 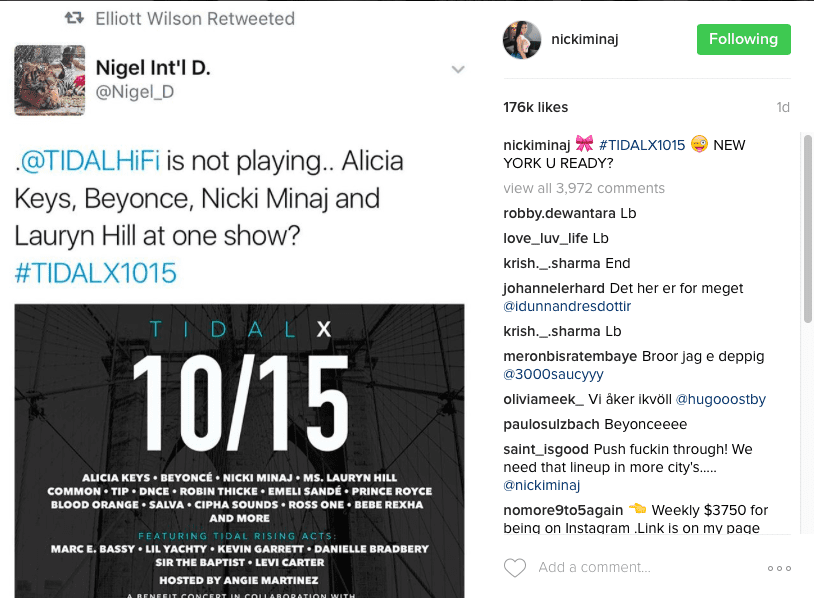 Jay and Bey will perform, as well as Nicki Minaj, Lauryn Hill and Lil Wayne, at Brooklyn’s Barclays Center. The event — for which tickets will start at $50, with some VIP packages going up to $100,000 — will raise money for Robin Hood, education for children in NYC and for charities nominated by the artists. The event will also be streamed live on Tidal. (Page Six)

Recent reports narrowed in on the possibility of a delayed rumored Jay and Bey album coming together.

However, Beyoncé’s fan account (aptly named the Bey Hivé) has just teased possible song lyrics from the duo’s ‘joint album session’, making us all go into meltdown at the thought of a sequel to Lemonade and a joint venture by one of the music industry’s most successful hip hop pairing. Now, of course, a fan account usually isn’t the most reliable source of information but this Twitter account has always appeared to have direct access to Queen B’s team, teasing videos from never-before-heard singles from the singer and releasing exclusive updates about Beyoncé up-coming VMA performance. (ELLE UK)

Comments Off on Nicki Minaj Says TIDAL X Hype Is Real: “U READY?”