Young Money’s Nicki Minaj and rap star boyfriend Meek Mill made sure not to miss a single moment of box office smash Straight Outta Compton this weekend by renting out an entire movie theater.

Nicki showed off a picture of herself and Meek in an empty theater on social media Sunday (August 16). 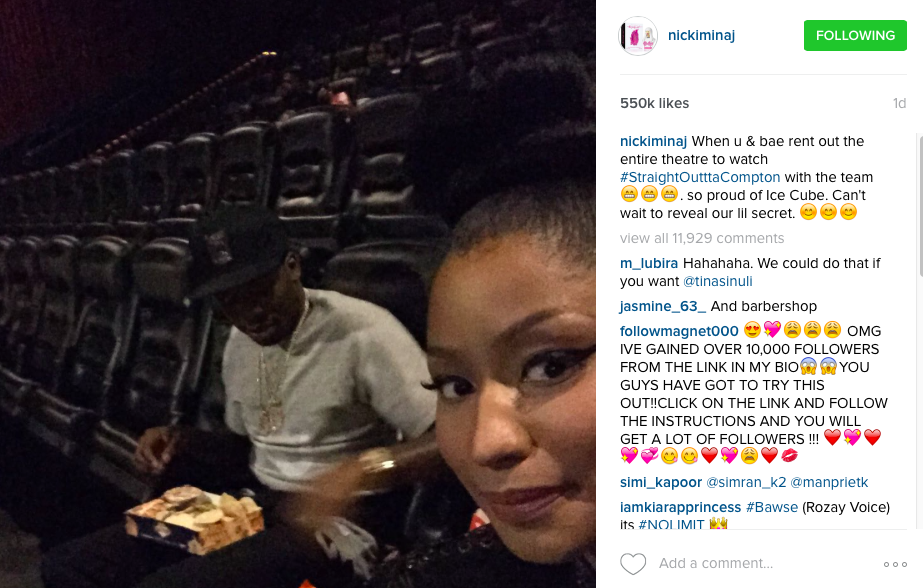 Find out what Dr. Dre said about his portrayal in the film and what Eazy-E’s daughter told SOHH about “Straight Outta Compton” on the next page…

After only 3 full days in theaters, the flick managed to debut at number one and surpassed its $28 million budget.

Music mogul Dr. Dre called Hollywood newcomer Corey Hawkins, who portrays him in the film, a perfect fit this weekend.

“I gotta be honest, it freaked me out when I met him. We had a conversation. We went out to dinner at this restaurant over in Hollywood. We sat across the table and he started talking to me and I heard him like, ‘What the is that?’ I’m saying this shit internally. It kinda freaked me out. At the same time, it’s one of the things that let me know he was the perfect guy for the job.” (Beats 1)

“We were filming it about a year ago and I spent some time on the set, just getting to know Jason Mitchell, who portrays my dad and he really just did a phenomenal job. I couldn’t be more proud and I don’t think there was anyone that could have played my dad better. The overall film is really good. Dr. Dre and Ice Cube and F. Gary Gary, director, they did a really good job. They were really sensitive with the whole story since my dad isn’t alive. His own personal part of the story, they had to sort of build around that so I’m just proud of it. There’s a lot that I feel was left out of his personal storyline but this movie was about N.W.A. as a collective and their brotherhood and how they started and everything they went through.” (SOHH)

Early box office sales projections had the biopic on pace for a $57 million weekend.

It’s the battle of the initials at the weekend box office, with N.W.A biopic “Straight Outta Compton” outperforming “The Man From U.N.C.L.E.” “Compton” pulled in $24 million in Friday receipts, putting it on track for a $57 million opening weekend, according to studio estimates. Universal had pegged “Compton” for an opening between $25 million and $29 million, about half the haul it’s now expected to generate. (Variety)