The Black Lives Matter movement has officially impacted NASCAR racing. At this past Sunday's Atlanta Motor Speedway race, the organization and multiple people showed support in the fight against inequality and injustice.

At the afternoon event, NASCAR made a big statement in support of Black Lives Matter by pausing before the race to acknowledge of the country’s social unrest. Black race car driver Bubba Wallace also personally revealed his involvement in the movement by wearing an “I Can’t Breathe” t-shirt.

The governing body vowed to do a better job of addressing racial injustice in the wake of George Floyd’s death. During their warm-up laps, the 40 cars pulled to a stop in front of the empty grandstands and shut off their engines so NASCAR president Steve Phelps could deliver a message over their radio sets. “Thank you for your time,” Phelps said. “Our country is in pain, and people are justifiably angry, demanding to be heard. The black community and all people of color have suffered in our country, and it has taken far too long for us to hear their demands for change. Our sport must do better. Our country must do better.” (ESPN)

Yesterday, black official Kirk Price made headlines for making a peaceful demonstration. He publicly kneeled during the national anthem to protest police brutality.

Amid the masked, mostly white faces at NASCAR’s Sunday race at Atlanta Motor Speedway, one official stood out. Kirk Price, a 49-year-old African American, saluted the flag from his knee during the national anthem. “I come from humble beginnings and I believe in humble protesting,” Price said. Just before Phelps’ voice came over the speaker, pastor John Dewberry delivered a pre-race prayer, and Price, with tears in his eyes, took a knee on the hot track and raised his right fist to the sky. (Charlotte Observer)

On Sunday, multiple NASCAR drivers came together and united in a must-see clip. The racers promoted Black Lives Matter and pushed for an end to inequality.

At least some positive change is coming following the death of black man George Floyd and global protests against police brutality. Minneapolis has agreed to ban police chokeholds after fired cops killed Floyd by kneeling on his neck. 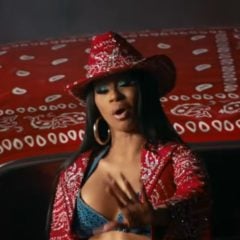