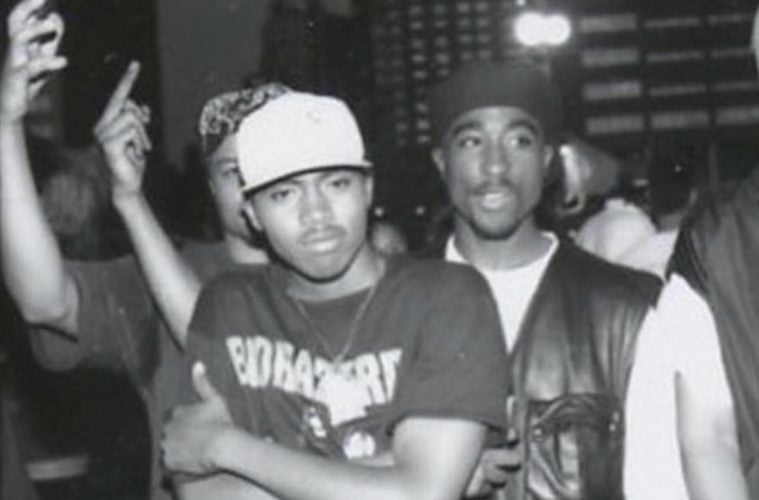 Nas Reacts To That Never-Before-Seen 2Pac Pic: “I Never Liked Taking Pictures Back Then”

New York rap veteran Nas has caved in and shared his thoughts on a previously never-before-seen pic of himself linked up with hip-hop icon Tupac Shakur.

Nasty Nas went to Instagram Tuesday (October 10) to provide context behind the shot.

Thank GOD there's pictures like these that pop up here n there. I never liked taking pictures back then so this photographer knew what he was doing. RIP DRAWS from QB to my left. 2pac & Reggie Noble on deck Bless up! My man BJ from QB behind Pac. #partyandbullshit #REBELS

Quick to holla at a hoochie with the same line.. I ain't mad at ya. RIP 2pac ! #REBELS

There's a book coming out by Photog: Al Pereira @lasagnaking and @contact.high.project. Shot in 1993. Book “Contact High: hip-hop visual culture” to be released fall 2018 by Random House/Clarkson Potter by @vtobak

Earlier in the day, the eye-opening new pic landed online and shook up social media.

On Tuesday (Oct. 10), an Instagram account by the name of contact.high.project uploaded a never-before seen image of ‘Pac and Nas together shortly before or after his performance at New York City’s Palladium on July 23, 1993. The image belongs to a contact sheet from the show. ‘Pac’s also in photos with Redman. (XXL Mag)

Suede @timberland on the feet make my cipher complete 📸 @soulbphotos

Days prior, buzz developed about Nas teaming up with the foot apparel giant.