Hollywood actress Halle Berry is moving into Will Smith and Jada Pinkett Smith territory this week after sparking some potential divorce gossip.

According to reports, Berry has lost her engagement ring and is not divorcing celebrity husband Oliver Martinez.

Our sources say, Halle lost her engagement ring in Mexico a year-and-a-half ago. She was at the Acapulco International Film Festival in January 2014 where she received the Silver Jaguar Award. Halle says the ring either fell off her hand or she left it on a table and someone took it. BUT …. she still regularly wears her gold wedding band. Our sources say there’s been no discussion about divorce with an attorney. (TMZ)

This week, Will Smith and Jada Pinkett Smith both put an immediate stop to divorce rumors on social media. 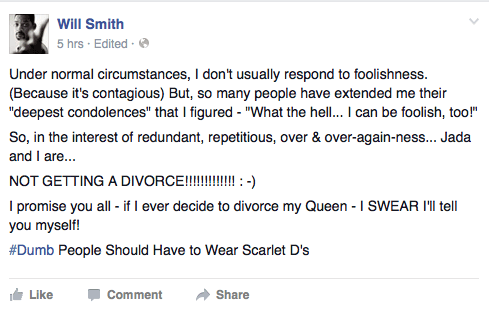 An alleged inside source spoke out on the married couple’s relationship earlier the same day.

“For Will and Jada, holding it together these past few years has been tough because their marriage has been on life support for a long time,” an insider told Radar. “They’re exhausted from trying to maintain the façade of a happy union,” the source continued. “They’ve decided to pull the plug in a carefully choreographed manner, [and] agree announcing their split at the end of the summer is the right move.” (Radar Online)

Both Hollywood superstars have two teenage kids together.

The 46-year-old Smith, who is filming the super villain flick, “Suicide Squad,” and his 43-year-old wife have been a fixture in the gossip glossies for the past four years amid reports of marital strife. In addition to a net worth estimated at $240 million, the couple has two children — son Jaden, 17, and daughter Willow, 14. (New York Daily News)