Atlanta rap group Migos have publicly reached out to fans following a publicized Georgia arrest this past weekend on weapons and drug possession charges.

The group posted up a shot of themselves in jail attire onto Twitter Monday (April 20). 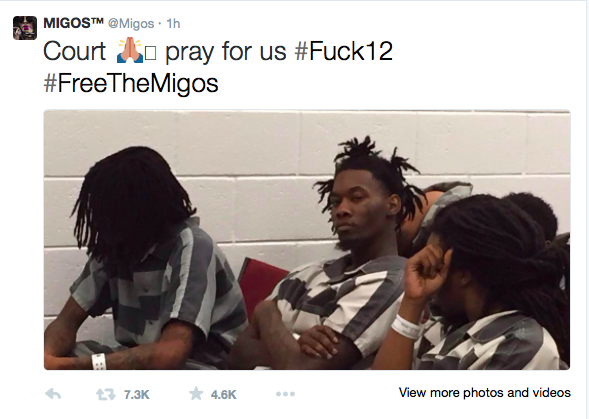 Check out the group members’ mugshots on the next page…

#Migos mugshots from the their arrests the other day !

According to reports, a stage manager at Georgia Southern University’s Spring Bling concert had the show abruptly stopped when police arrived Saturday (April 18).

We’re told all 3 members of Migos left the stage — along with a posse that was at least 15 deep — and they were all questioned by cops. The Bulloch County Sheriff’s department made multiple arrests, and the suspects are currently being processed at the jail. Unclear what they’re accused of, and we also don’t know if any of the Migos guys got busted. (TMZ)

Cops reportedly arrested Migos’ Quavo and Offset on a handful of charges.

2 members of Migos — Quavo and Offset — got nailed by cops. The sheriff says Quavo was booked for misdemeanor marijuana possession, felony possession of a schedule II narcotic, and carrying a loaded gun on school property. Schedule II drugs include cocaine, Oxycontin, and codeine. Offset faces the same charges, plus gun possession by a convicted felon. (TMZ)