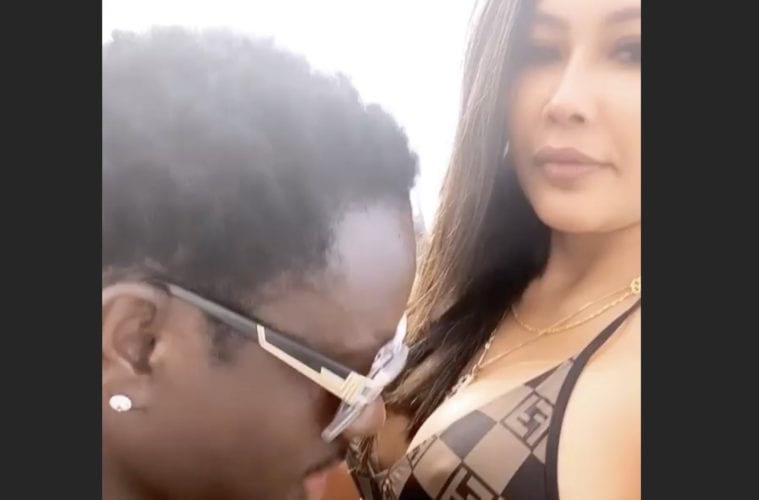 Michael Blackson Credits Jeezy + Dave Chappelle For Landing Him His Thick Asian Queen: “Latinas If This Don’t Work Out Ya Next”

Comedian Michael Blackson is in love-love. The hip-hop funnyman has shared an up-close look at who he’s ready to risk it all on in 2020.

Blackson went to Instagram Wednesday to share a steamy pic of himself and a mystery woman. Michael playfully credited a few high-profile black celebrities finding love with their Asian counterparts as the motivation behind his new boo.

“Had a beautiful Nubian queen and f*cked it up, had a snow bunny and the snow melted then I hung out with Dave Chapelle, Young Jeezy, Terrence Howard and Chris Brown then this happened. Latinas if this don’t work out ya next.” -Michael Blackson’s Instagram

Over the past few hours, Blackson has teased fans about his new boo. He’s shared pics of himself looking cuffed up alongside the curvy vixen.

“I want nothing more than to spend the rest of my life loving you….YES💍🤍 Thank you, everyone, for celebrating this journey with us. We are praying love over everyone from here.” -Jeannie Mai’s Instagram

According to reports, the Snowman popped the big question after a quarantine dinner together. Jeezy reportedly planned on asking for Jeannie’s hand at a restaurant before the country went into a nationwide lockdown.

“Jeannie Mai and Jeezy are engaged! 💍 Jeezy was originally planning to propose to Mai during a previously planned trip to Vietnam. But due to the coronavirus outbreak, he decided to surprise her with a proposal during a special date night at his home. ❤️ Tap the bio link for all the sweet details. ✨ | 📷: Courtesy Jeannie Mai” -People’s Instagram