As seen on SOHH.com - follow @sohh @sohhdotcom
3.4k Views Comments Off on Megan Thee Stallion Opens Up On Alleged Tory Lanez Shooting: “I Felt Betrayed By A Friend”
Share

Texas rap star Megan Thee Stallion is spilling all the tea. She went online this week to speak on the recent shooting that left multiple bullets in her foot.

Megan took to Instagram Live to speak on getting shot. She says she felt betrayed and revealed the emotions she was going through.

On Friday, Cardi B and Meg dropped a collaborative single “WAP.” The pair also released an NSFW video to go along with the track.

Cardi B and Megan Thee Stallion have released their new song “WAP,” which they’d teased earlier this week. They’ve also shared an accompanying video (directed by Colin Tilley). Cardi claimed on Instagram that the video features the “wet and gushy” censored version of the song. “The song was so nasty that YouTube was like ‘hold on, wait a minute, that song might be too goddamn nasty,’” she said. Watch the video—with cameos from Kylie Jenner, Rosaliá, Normani, Rubi Rose, Sukihana, and Mulatto—below. (Pitchfork)

Grammy-winning music stars Beyoncé and Lizzo are 100 percent here for Megan Thee Stallion’s speedy recovery. The injured rap heavyweight went online last week ago with some shout-outs for both musicians sending her a care package. Megan went to her Instagram Story to show a care package of candy and other goodies from both Lizzo and Beyoncé. It makes a nice recovery present, as she’s still healing following recently being shot in the foot twice.

New York rapper 50 Cent is trying to make things right with Megan Thee Stallion. The G-Unit boss has come forward with an open apology to the Houston rap star over jokes he made about her near-death altercation with rap crooner Tory Lanez. Last week, 50 hit up his Instagram page to come clean about his wrongs. Fifty said he didn’t realize the severity of Meg’s injury and apologized for using a meme to poke fun at her.

Comments Off on Megan Thee Stallion Opens Up On Alleged Tory Lanez Shooting: “I Felt Betrayed By A Friend” 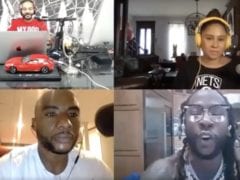 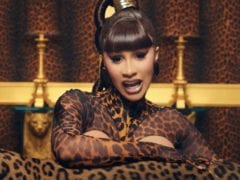