Maybach Music Group‘s Meek Mill is clocking in his daddy duties. The Dreamchasers boss took a minute to show fans what sneakers his son begged him to cop.

Meek went to Instagram Tuesday (November 15) with footage of his kid showing off some Blinky Shoes.

Over the past few days, Meek has teased fans about putting together a follow-up to his hard-hitting DC4 mixtape album.

DC4/ and a baby……. work talk! @dannyswiftgarcia "nothing you don't have control of should never affect you! @willngo

U prolly thought a n#%ga wouldn't $hyne like dis …… got a deal now I $hyne like this….. diamonds on my neck and I blind em wit da wrist …. yea it's too easy baby! #DC4andAbaby

Heard this song b4 he went stupid 🔥🔥🔥🔥🔥🔥🔥🔥🔥 I wanna know he produced the beat it's crazy! #DC4.5 #MeekMill #Motivation #TheChasers

I really wanted this track the most 🔥🔥🔥🔥🔥🔥🔥 ( the beat transitions into something more crazy ) prod by @infamousrell1 ….. #MeekMill #DC4.5 #Motivation #TheChasers

You smell death in the air he come the kill! #DC4.5 ( also this isn't a diss he changed it to just a song ) They making memes of me I'm everything you niggas dreamed to be 🔥🔥🔥🔥🔥🔥🔥🔥🔥🔥🔥🔥 #MeekMill #Motivation #TheChasers …. prod by @dollabillkidz

On some hood shit! Prod by @dollabillkidz 😶 #DC4.5 #MeekMill #TheChasers 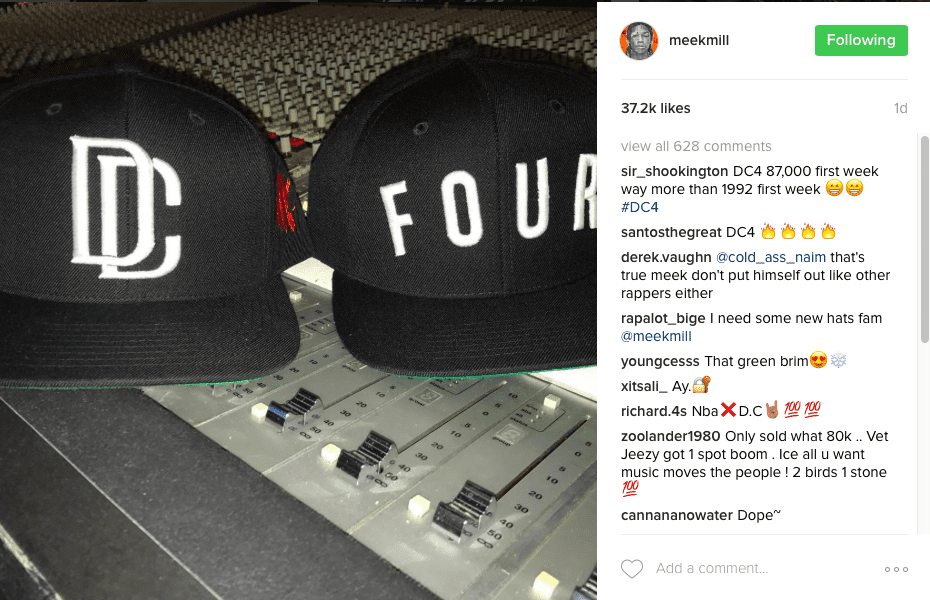 The album, which was released on Oct. 28 through YJ/CTE/Def Jam Records, earned a little more than 89,000 units in the week ending Nov. 3, according to Nielsen Music. The set sold 73,000 in traditional album sales. Meek Mill’s new mixtape album DC4 debuts at No. 3 with 87,000 units (and 45,000 in traditional album sales), marking his third charting effort. (Billboard)