Meek Milly acknowledged the sales projections and potential to land atop the sales chart next week Friday (July 3) night. San Diego Chargers’ Melvin Ingram recently talked to SOHH about his respect for Meek and intent to buy the new LP.

“One of my favorite rappers is Meek Mill. I feel like I gravitate a lot more to his music because I feel like I understand where he’s coming from. I would never try to say I mold myself after nobody. Of course I’m going to be on the lookout for [Dreams Worth More Than Money] because I feel like Meek’s whole album is going to be heat. I’m going to grab that. I mess with the whole [Maybach Music Group] movement. I’ve been on Meek’s music for a minute. I’ve been rocking with him for a minute.” (SOHH)

Based on initial estimates, the Philadelphia native’s sophomore studio release should easily debut atop the sales chart next week.

Rapper Meek Mill is heading for his first No. 1 album on the Billboard 200 chart. Industry forecasters suggest his latest release, Dreams Worth More Than Money, could move over 200,000 equivalent album units in the week ending July 5. That should easily place the set atop the Billboard 200 chart when its top 10 is unveiled on Wednesday, July 10. (Billboard)

Mill revealed his new project will arrive this week on social media a few days ago. 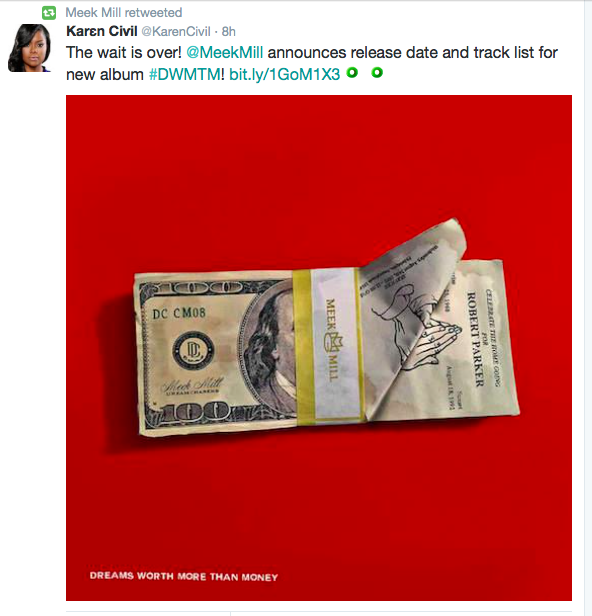