999 Views Comments Off on Macklemore Admits He Should Have Hit Up Iggy Azalea Ahead Of “White Privilege II” Release: “I Should Have Let Her Know”
Share

Washington rapper Macklemore recently talked about the the aftermath of his dicey “White Privilege II” song and why he should have spoke to Hustle Gang’s Iggy Azalea before its release.

In Mack’s opinion, he dropped the ball on letting his reference-heavy track hit the masses before speaking to Iggy.

“I don’t think people understood that I’m in my own head [saying], ‘You’re Miley, you’re Elvis, you’re Iggy Azalea’ — I’m talking about myself. … Iggy and I came up together. We were on the XXL ‘Freshmen’ cover together. There’s enough of a relationship that I should have let her know beforehand. And I didn’t do that.” (Billboard)

“I think me and Macklemore exist in two different worlds. I would never think twice about marching next to my brother for an issue we both believe in. These are issues that I am actually facing. Cleveland, Ohio is the real deal. We’ve seen it happen especially moreso with all of these police shootings, friends of mine being killed, all of that happening within the past couple years. The tension is rising more and more and I just have no reason to think twice about standing for what I believe in. I don’t see these people as my black friends — these are my friends, these are my family, these are people in my city that we want to stand up for. I think just as much as racism is an issue so is classism. Economics runs the world. The one percent [of the population] get rich and fat, leaving the other 99 percent to suffer. I’m part of the 99 percent and I’m sticking up for everyone who is trying to do something with their lives and make it out.” (Billboard)

A couple months ago, MGK discussed his disinterest in categorizing hip-hop by skin tones.

“I’m not just a great white rapper, I’m a great rapper, why the f*ck is it about color,” MGK said when told he’s one of the top five greatest white rappers. “Race is not an issue. Race is an issue for people like Macklemore and sh*t. Bro, I’m comfortable in my own skin. I can’t help other people be the same way. Dog, I’m listening to the Rolling Stones, I can’t talk.” (TMZ)

Iggy eventually came forward and spoke out on the situation via Twitter.

Comments Off on Macklemore Admits He Should Have Hit Up Iggy Azalea Ahead Of “White Privilege II” Release: “I Should Have Let Her Know” 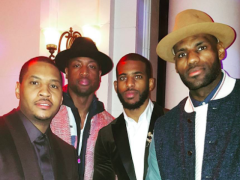