Approached by paparazzi this week, MGK discussed his disinterest in categorizing hip-hop by skin tones.

“I’m not just a great white rapper, I’m a great rapper, why the f*ck is it about color,” MGK said when told he’s one of the top five greatest white rappers. “Race is not an issue. Race is an issue for people like Macklemore and sh*t. Bro, I’m comfortable in my own skin. I can’t help other people be the same way. Dog, I’m listening to the Rolling Stones, I can’t talk.” (TMZ)

Watch Machine Gun Kelly’s interview on the next page…

Iggy eventually came forward and spoke out on the situation via Twitter.

“You’ve exploited and stolen the music, the moment,” Mack raps. “The magic, the passion, the fashion, you toy with / The culture was never yours to make better. You’re Miley, you’re Elvis, you’re Iggy Azalea – Fake and so plastic, you’ve heisted the magic/ You’ve taken the drums and the accent you rapped in/ You’re branded ‘hip-hop,’ it’s so fascist and backwards.” (“White Privileges II”)

Iggy addressed the verbal jab on her Twitter page once the song went viral. 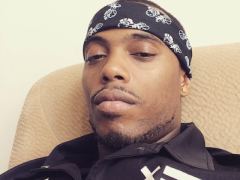