Lil Yachty & Joe Budden Make Peace In Epic In-Person Face-Off: “I Know How To Do This Sh*t” [Video]

Atlanta rapper Lil Yachty and Joe Budden have ended their war of words. The duo met face-to-face this week to explain their publicized recent e-beef.

During an appearance on Budden’s “Everyday Struggle” debate show, Yachty defended the image he’s created of himself.

“So when you come from a college dorm room, with no money, you scamming credit cards, and you ain’t gettin’ no play with no girls, you have no clothes, you have no car and you come to having three or four cars, millions of dollars, half a million dollars on your body just to wear, and any kind of clothes you want, any h*es you want, how can you be upset? And that’s where you have a problem. … First off you said I’m signed to Capitol, correct. Then you basically discredited Capitol for everything we have in hip-hop. Now you know Migos is signed to Capitol? Number one music group. … Just because I’m not hood and street and I’m signed to Capitol does not mean I didn’t come from [Quality Control]. I’m from Atlanta. I have my own concept in how I brand myself and how I make my sh*t pop because I know how to do this sh*t. I don’t have no nice corporate white person in my ear. … I’m happy that I can make you think I got somebody behind me. That lets me know I’m doing the right sh*t the right way.” (Everyday Struggle) 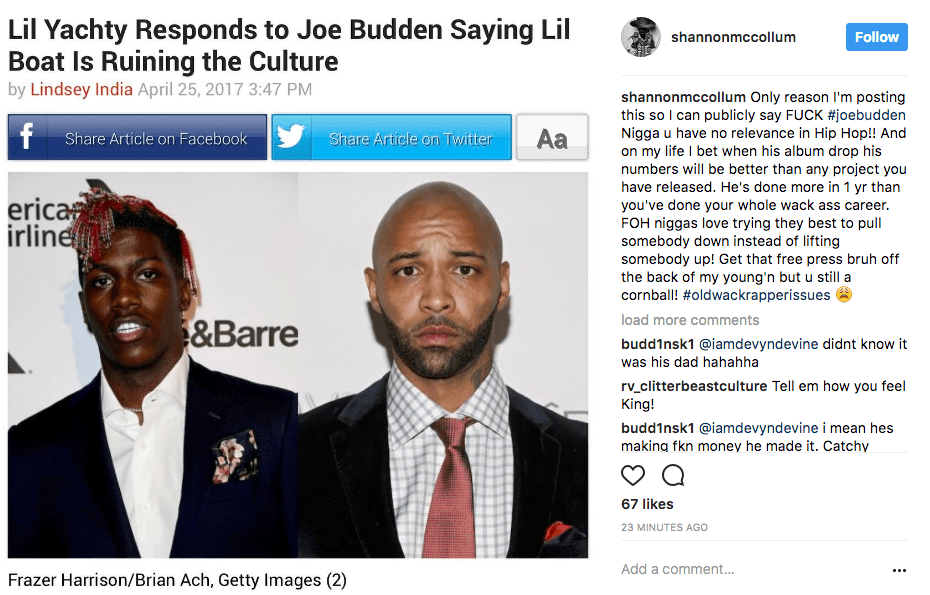 A day prior, Yachty responded to Budden with some Twitter trolling.

Budden wasted little time and made sure to return some playful Yachty fire.