Last night, Yachty went to Instagram with a pic of himself alongside Andre 3000 and Big Boi. 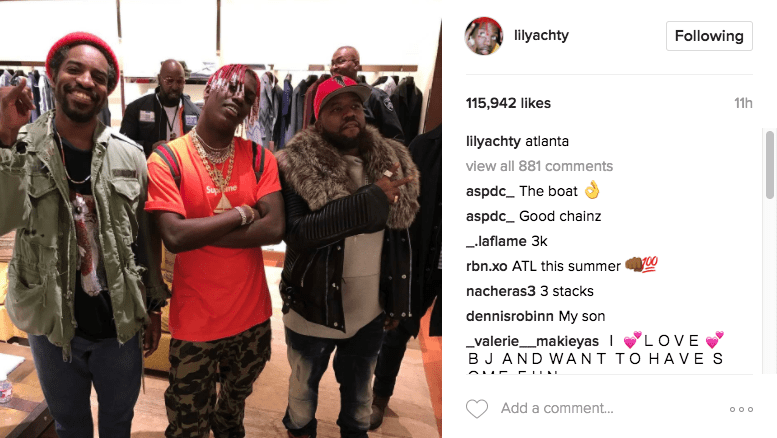 “And then Beyoncé and Jay Z came into the VIP and they knew who I was. I love Beyoncé and Jay Z. He’s like an idol. He’s a genius. Jay was asking if I wanted some alcohol. I guess they didn’t know I didn’t drink. He had a full bottle of Ace of Spades. Like a gold bottle. It’s like a thousand-dollar bottle. I was like, “No, thank you.” I remember I was singing “Fix You” by Coldplay and Jay Z was surprised that I knew the song. He told me I should remake it. I was like, “I might just yet. Only if you get on the track with us.” And he said yeah. It was dope.” (The FADER)

In November, Yachty talked about his musical influences ranging from rock group Coldplay to Lil B.

“Coldplay is probably one of my biggest [influences]. Coldplay, Kid Cudi, Kanye West, [A$AP] Rocky, Tyler, the Creator, Lil B. 100 percent. I don’t know, it’s like a mixture, bro. … If I could, I’d sit down with Lord Jamar – he was saying a n*gga like me is destroying hip-hop. Like, OK, to say something like that, to say Lil Yachty’s destroying hip-hop, his fans are dumb or something like that, I want to know what makes you say that.” (Beats 1)