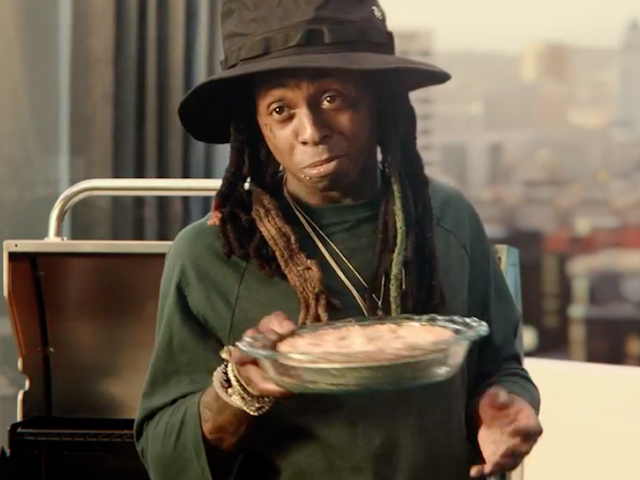 In the minute-long ad, Jeff Goldblum plays his recurring Apartments.com spokesperson “Silicon Valley Maverick” Brad Bellflower as he assists a gospel choir moving crew while singing The Jeffersons theme song, “Movin’ On Up.” Goldblum plays a piano lifted to the top floor, where he finds Weezy and George Washington — a play on The Jeffersons’ main characters George and Louise Jefferson — hosting a Super Bowl party. (Billboard)

Watch the full Lil Wayne commercial on the next page…

Just in case you weren’t already tired of “Hotline Bling,” Drake and T-Mobile just teamed up for a Super Bowl spot that, no matter what they or anyone else tells you, actually makes the song worse. Here, Drake, back in his trademark turtleneck and Timberlands, is interrupted mid-dad-dance by reps for an unnamed carrier, who each give him advice on how to advertise for their bad deals. (The Verge)

In what could be the strangest commercial aired during Super Bowl 50, Lil Wayne and “George Washington” will hang out and watch the Big Game together in an ad for Apartments.com. The site shared a brief 15-second trailer for the commercial Wednesday, with the rapper lounging on the couch while anxiously awaiting for the first president to bring over some buns. (Rolling Stone)

Grammy-winning singers Lady Gaga and Beyoncé Knowles-Carter are both headed to Super Bowl 50.

Lady Gaga will sing the national anthem at Super Bowl 50, it was announced Tuesday. The addition of the singer contributes to the big game’s already star-studded musical lineup: Coldplay and Beyonce will play during the halftime show. Additional acts including Bruno Mars, Adele, Rihanna, Taylor Swift and more have been rumored to be participating in the Pepsi spectacle as well. (Yahoo! Music)