New York rapper A$AP Rocky might have bragging rights this summer for having the most star-studded album with Kanye West, Lil Wayne, Future and more being attached to his upcoming A.L.L.A. album.

According to the latest reports, the LP will come stacked with seemingly endless collaborations. 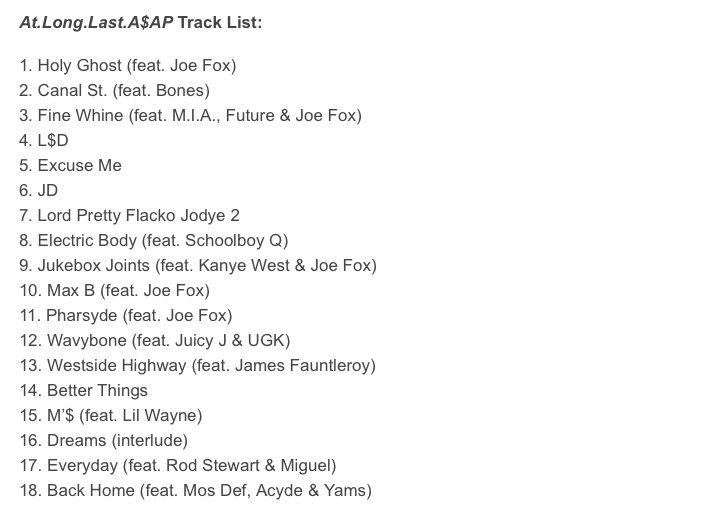 Recent reports revealed the project would arrive a few weeks later than expected.

After debuting it during his Red Bull Music Academy lecture, A$AP Rocky released the studio version of his next single, “Everyday.” “Everyday” features production from Mark Ronson and Miguel, who also lends his vocals on the hook. At.Long.Last.A$AP. will be released on June 2, not May 12 as previously reported. (Complex)

“Rocky album is sounding crazy. It sound like Rocky sound, but to the 10th power, so imagine what that sounds like. Everything you love when we all first came out on the scene, times 10,” Ferg said referring to A.L.L.A. “Everybody individually have their mixtapes practically done already, we just trying to figure out who’s going to come first. Visuals. But as far as the A$AP Mob album, we still working on it. We got some crazy sh*t.” (XXL Mag)

A$AP Rocky just gave a talk in London as part of Red Bull Music Academy’s lecture series, and at the end he debuted a new song from his forthcoming album At.Long.Last.A$AP, “M’s.” Hear it here. In the talk, he also said that Yasiin Bey (aka Mos Def) will appear on the album, and that UK artist Joe Fox contributed to several tracks. (The FADER)