Young Money’s Lil Wayne and Christina Milian are reportedly giving love another chance after a publicized split a few months ago.

Christina and Lizzy Milian are at Christina’s house when they hear a knock at the door. When Christina answers it, she’s surprised with a huge bouquet of flowers and a note that says “just bekuz.” “Well I wanted an apology and I guess I got a token,” Christina says. “I mean this is definitely an extension, what is it called? He’s extended an olive branch. He’s giving me a sign of hope.” “I’m feeling like a new woman,” Christina says. “Wayne and I are back together and so I figured it’s time to get a new look from top to bottom.” (E! Online)

This past Thanksgiving, Milian appeared to send a warning shot to Wayne following their recent breakup on Twitter. 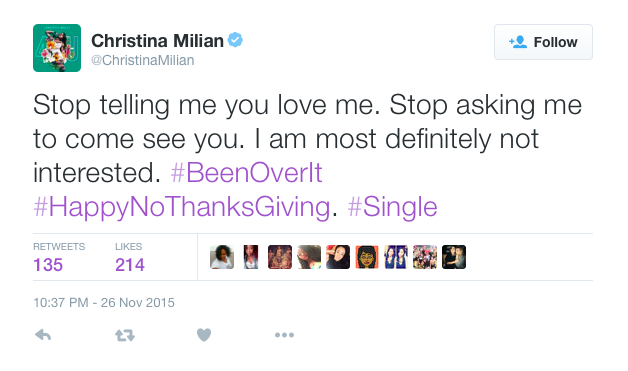 Over the fall, Milian defended the decision to show her Lil Wayne split on a recent “Christina Milian Turned Up” episode.

“I’m really proud of what we’ve shown,” she tells us. “It’s good TV, it’s real TV, it’s sisters and family and what love is. There’s nothing I would take back from anything on this season. … We’ve been through all kinds of things in life. It’s not even necessarily entertainment, you’re just hoping somebody is relating to it and they understand whatever it is that we were all going through. It’s very real. I’m proud of us for keeping it real this season. We just want to live our lives, but with cameras there.” (Too Fab)

In November, Christina said she expected to shed a few tears when the episode aired.

“I’m sure I’ll be crying as I watch myself cry,” Christina told E! News exclusively last week. “Reliving it, it’s like a roller coaster and at the end of the day I feel like most of my girlfriends, or anybody who has a long-lasting relationship, nothing is perfect and sometimes they last and sometimes they don’t. Sometimes you just gotta let go of things and let them happen. It’s a lot of live and learn.” (E! Online)

Milian also talked about her state of mind since the summer split.

“Right now I’m just enjoying working. I’m in my zone when it comes to work. I focus on our family, on our kids,” she revealed to us the other day. “I think it will take a little bit of time before I start getting into the dating scene.” (E! Online)