As seen on SOHH.com - follow @sohh @sohhdotcom
3.1k Views Comments Off on Lil Uzi Vert Channels His Inner Meek Mill Bike Life By Turning Up On A Four Wheeler
Share

Philadelphia rapper Lil Uzi Vert is living the bike life. Heading into the weekend, footage emerged of the hip-hop star grinding it out Meek Mill style on a four wheeler.

In the new video, Lil Uzi Vert is riding through the city. He pops a wheelie on a four wheeler and reminds fans he’s all about having fun outdoors.

Fellow Philadelphia native Meek Mill is known for his love of bike life and being an avid rider. He even faced legal penalties several years ago for popping a wheelie in violation of his parole.

Outside of bikes, Lil Uzi Vert and Future have turned their recent teasers into realties. After mounted speculation, the hip-hop stars joined forces to release their new “Patek” and “Over Your Hear” songs to the masses. Last week, Uzi Vert’s YouTube page had a couple of new songs uploaded. While there aren’t any music videos to accompany the singles – yet – the tunes come just in time for fans’ weekend goals.

On Uzi’s birthday, Future went to his Instagram page to tease new music coming. He even referenced both himself and Lil Uzi Vert as Pluto and Baby Pluto.

A few days prior to that, Future shared a major teaser clip of something big – either a new joint album or music – was coming together with Uzi Vert. 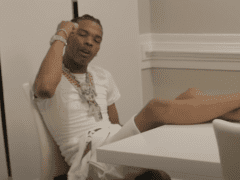