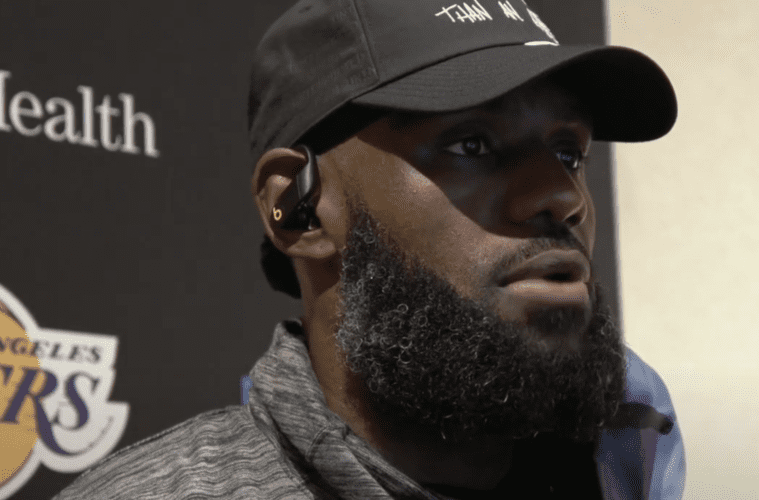 Los Angeles Lakers superstar LeBron James loves the sport of basketball. The three-time NBA champion has come forward to speak on and defend his decision to help the league restart to complete the 2019-2020 season.

During a Lakers practice media conference, King James took some time to address reporters on his health condition and leaving his family to join select other teams in an Orlando, Florida bubble. LBJ also addressed whether he considered not returning for the league’s restart with coronavirus concerns and the Black Lives Matter movement going global.

“Never crossed my mind that we did not need to play this beautiful game of basketball that brings so many people together, that brings happiness, that brings joy to the households to so many families,” James said when asked if he considered not playing the remainder of the 2019-2020 season. “From kids that’s just born – their parents put on their favorite team’s clothing all the way to you’re 60, 70, 80 years old and you’re just watching the game from a sport. It’s all about sport. I’m happy to be a part of one of the biggest sports in the world and that’s the game of basketball and I’m happy to have a platform where not only people will gain joy from the way our team plays the game but from also what I’m able to do off the floor as well. Being able to use my platform, the NBA’s platform to continue to talk about what’s going on because I will not stop until I see real change for us as Black America, African Americans, for people of color. I also believe I can do both. I believe I can bring happiness to a lot of homes with the way I play the game, the way the Lakers will play the game, and I will continue to push the envelope and keep my foot on the gas on creating real change for us as people of color in America.” (Los Angeles Lakers)

This weekend, King James went to Instagram with a very public message to his NBA rivals. LeBron vowed to return to the league’s regular season with a vengeance and determination to win another NBA championship.

“Almost time to come out the Cryogenic Tank and get back to destroying whoever in front of me. Be Aware! #RevengeSeasonContinuesSoon😤 #KingMe👑 #PlatiumBeardLit🧔🏾 photo cred. Whoever made it 🙏🏾” -LeBron James’ Instagram

Recently, diehard Lakers fan Game said he didn’t feel the NBA should come back this season. The California native said players and the league should cancel its restart and focus on protesting police brutality.

“Hood morning (no typo)….. To be honest, I miss sports & the everyday normalities of the way we lived prior to the pandemic & the situation at hand. But I have to stand in agreement with my brother @stak5. Anything that is or will be a distraction to the movement & or the mission of justice for all the senseless acts of violence against black people in this country as well as the countless un-just murders of our people, should be put on hold until we as a people have truly prevailed in this fight. #BlackLivesMatter” -Game’s Instagram