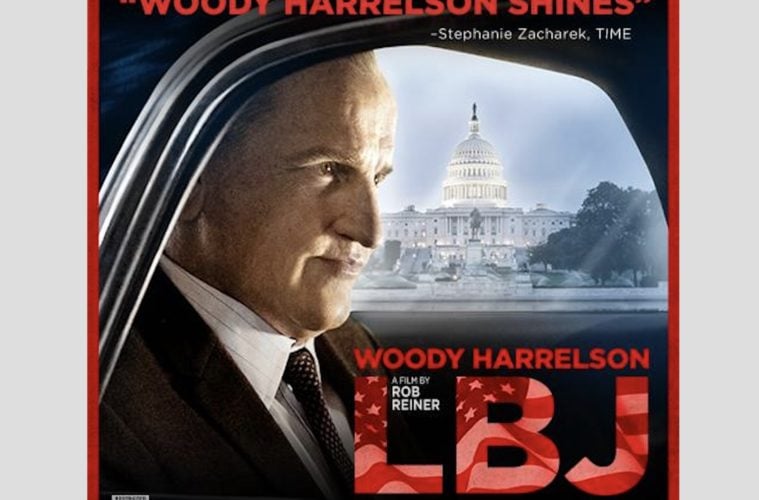 From acclaimed director Rob Reiner who brought us such iconic films as The Princess Bride, A Few Good Men and The American President, comes LBJ. Starring Academy Award nominee Woody Harrelson as Lyndon Baines Johnson, LBJ explores the superb political skills of this complex man who takes on the mantle of the presidency after the assassination of John Kennedy to make the Civil Rights Act of 1964 the law of the land and one of his many signature bills. Also starring Academy Award nominee Richard Jenkins, Jennifer Jason Leigh and Bill Pullman, own your copy of LBJ on Blu-ray, DVD & Digital now.

Today, check out the top five reasons you should buy LBJ on Blu-ray! [Make sure to read each reason and enter to win your own copy!]

The first reason you should buy Rob Reiner‘s LBJ movie is because of the brilliant Woody Harrelson playing the role of President Lyndon B. Johnson. If you have watched Hollywood flicks over the past 20 or 30 years, you know Woody is a certified superstar in the film industry. Whether it’s starring in classics like White Men Can’t Jump and Money Train or branching into deeper, worldwide territory like The Hunger Games and War for the Planet of the Apes, he proves time and time again his acting range is no joke. LBJ might just be his most serious work to date and really puts him in a position we’ve rarely seen. Instead of the jokes and gags, Woody really goes the extra mile to focus on a time in American history where tensions were most high and racial change had to come about. LBJ just adds to the greatness which makes up Woody Harrelson.

The second reason you should buy Rob Reiner‘s LBJ movie is because this is perfect timing with President’s Day Weekend around the corner. What better way to educate people of all ages than with a gripping real-life story about a former president. It’s too easy to focus on President Abraham Lincoln and President George Washington and the President Bill Clinton and President Barack Obama legacies are already solidified and still fresh in our minds. Go a bit deeper – especially in light of the racial incidents we’ve experienced in America these past few years – and get an eye-opening story you can share with the family.

The third reason you should buy Rob Reiner‘s LBJ movie is because director Rob Reiner is behind this production. His work goes from When Harry Met Sally… and A Few Good Men through The American President and The Bucket List. He’s worked with Hollywood elite and now has his signature on this newly released Blu-ray. Not only did he direct this but Reiner produced LBJ – which only goes to show you how much of a passion project this is for him.

The fourth reason you should buy Rob Reiner‘s LBJ movie is because this is a true story. We’re living in times where fiction reigns supreme – which isn’t a bad thing but sometimes it’s good to see something on the big screen people can either relate to or learn more about after the end credits. The film shows how LBJ took a horrific attack like the fatal shooting of President John K. Kennedy and showed how President Johnson took control, through a fair share of obstacles to uplift not only the presidency but the entire nation.

The fifth reason you should buy Rob Reiner‘s LBJ movie is because of the star-studded cast. Woody Harrelson, Jennifer Jason Leigh, Jeffrey Donovan and Bill Pullman put together a strong Rob Reiner story. Watching Woody control the screen while Leigh takes on the role of Lady Bird and Jeffrey Donovan as JFK all come together masterfully. If you’re looking for an educational and star-studded production, LBJ should have you covered.

Check out the top five reasons you should buy Woody Harrelson's new LBJ on Blu-ray and enter to win your own copy!
in getfrush Entertainment on LockerDome