Lauryn Hill Tries To Save Face After Concert Disaster: “There Were Factors Out Of Our Control” 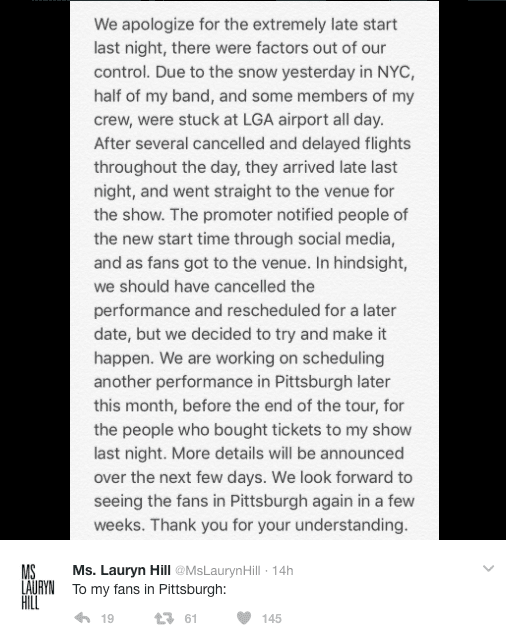 Only a fraction of the audience had stuck around when singer-rapper Lauryn Hill took the stage in Pittsburgh more than three hours late. A disc jockey on the bill, DJ Motormane, tells the Pittsburgh Post-Gazette that Hill was at Heinz Hall by 5:30 p.m. to rehearse for Tuesday night’s 8 p.m. show, but that her band apparently was delayed by weather. Motormane played until about 9:30 p.m. followed by musician Paul Beaubrun, before Hill’s DJ took the stage at 10:30 p.m. (The Morning Call)

The setback sparked a few tense reactions from Twitter users.

"Never Ready Or Not" tour keeps rolling RT @pjhoody: "Yo you going to that Lauryn Hill concert tonight?"

Lauryn Hill: "I can't be late to my concert if I don't show up…" pic.twitter.com/vM3c787IOV

UPDATE: She has appeared pic.twitter.com/XXexLv8cFN