Instead of avoiding the topic, Samsonova defended the decision to keep Jenner’s see-through wet body in the film.

“With the nudity, I know a lot of people have a lot of hard feelings about it and they’re not afraid to express it on social media. But for me, it’s not about the nudity. It’s about what this image makes you feel. For a moment, I wish people could just forget who they’re looking at and what they’re looking for and just connect with an image and be like, ‘Oh, this image actually makes me feel a little bit uncomfortable. And how is that exciting? How is that enticing?’ That’s why this film exists, to make you feel something.” (Complex)

“They have a genuine, beautiful energy,” she said. “I’ve never heard anything that was not nice. It’s just amazing, positive energy. That’s the world I’ve experienced with them.” (Complex)

Sources close to Kylie tell us she and her camp have seen the alleged sex tape that surfaced on a website Thursday, and their only reaction is … it’s 100% not Kylie doing the deed. We’re told she’s scoffing, particularly because the blurry woman with blonde braids doesn’t even look like her. Kylie was rocking that ‘do and similar clothing a couple months ago on Snapchat. Whoever “leaked” the tape attached her Snap videos to make it seem like the whole thing was real. (TMZ)

Recently, Tyga showed off his feelings for Jenner by donning gear with her on it. 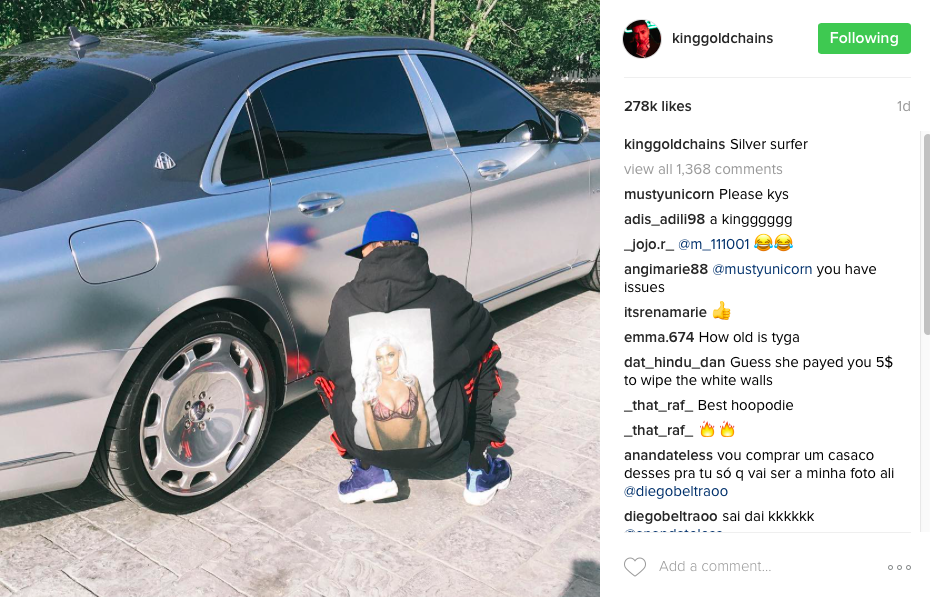