Kylie Jenner Puckers Up About Her Lips: “I Felt Like No One Wanted To Kiss Me”

Reality TV star Kylie Jenner is keeping it 100 on her physical features. In a new Complex intervew, the 19-year-old speaks on her now-infamous lips.

Within her cover feature, Jenner explains why she had her mouth go 0 to 100 so quick.

“It has been an insecurity of mine all my life,” she says now. It all started when she was in middle school. “This guy I kissed was like, ‘Your lips are really small but you’re a really good kisser. I didn’t think you were gonna be good at kissing,’” she remembers, crossing her arms and hunching over. The conversation obviously makes her uncomfortable. “It was so rude. From then on, I just felt like I saw guys staring at my lips. I felt like no one wanted to kiss me.” (Complex)

This week, Kylie responded to social media backlash she received over how she dresses. 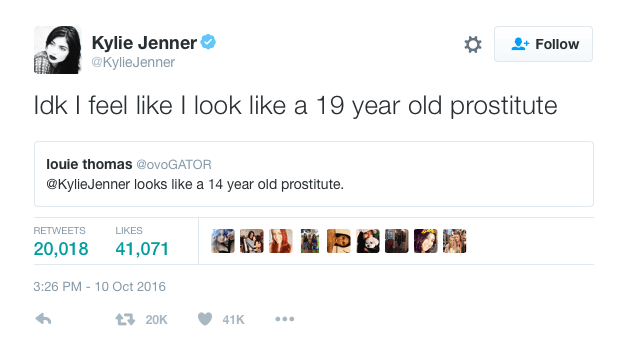 Over the past few days, Kylie has treated her fans to jaw-dropping pics.

“It was miscommunication on my end. I thought they weren’t having Chyna at our baby shower. Chyna’s baby shower is actually this Sunday, but they were trying to do a little surprise ‘guy’ baby shower for me and I was just upset trying to fight for Chyna like, ‘Yo, she has to be at the baby shower. She’s birthing my child. She needs to be there.’ It was literally miscommunication and I probably shouldn’t have went on Twitter, but I did – I kind of took all my anger out on Kylie and my family. It wasn’t just Kylie, it was my whole family. I went in on them on group text. And I was just being petty and posted her number. I was like, ‘Yo, it’s not that serious. We change our numbers all the time.” (“On Air with Ryan Seacrest”)