Florida rapper Kodak Black knows his days behind bars are numbered. The hip-hop artist has released a full-fledged thank-you letter following his publicized six-month jail sentence on a probation violation.

Last night, Black issued a statement thanking a slew of people from the judge to his legal team.

First and foremost I want to thank the lord for this blessing in disguise which was sending me back to jail January 18 2018 #1800 Second I want to thank the lord again for using my advocate Bradford Cohen ( @lawronin ) as an instrument to speak through him and work diligently on my behalf. I would also like to thank Brad for seeing me as more than a client and for looking out for me as one of his family members. Last but not least I would like to thank the judge Michael Lynch and the prosecutor Michelle Boutros for giving me a fair deliberation and not over looking me and judging as the media and the nay sayers set me out to be #1k #dietolive #HBK

Yesterday, a report emerged about KB having to serve months in jail for his probation violation.

Octave, who has been in jail since Jan. 18, entered an open plea in court today to previous charges of violating probation while driving with a suspended license and associating with people engaged in criminal activity. He was sentenced to 364 days in jail, with credit for time-served. Octave will now be released from jail in six months. (Local 10 News)

Protective custody is usually reserved for high profile incarcerated people like celebrities, informants, former cops/lawyers, and also sex offenders who are at risk of being accosted in jail or causing a ruckus otherwise. While the prospect of being in a jail’s general population setting would be daunting for some, Kodak has been incarcerated before and would likely feel a better peace of mind in the social setting than being isolated, as unorthodox as that sounds. (UPROXX) 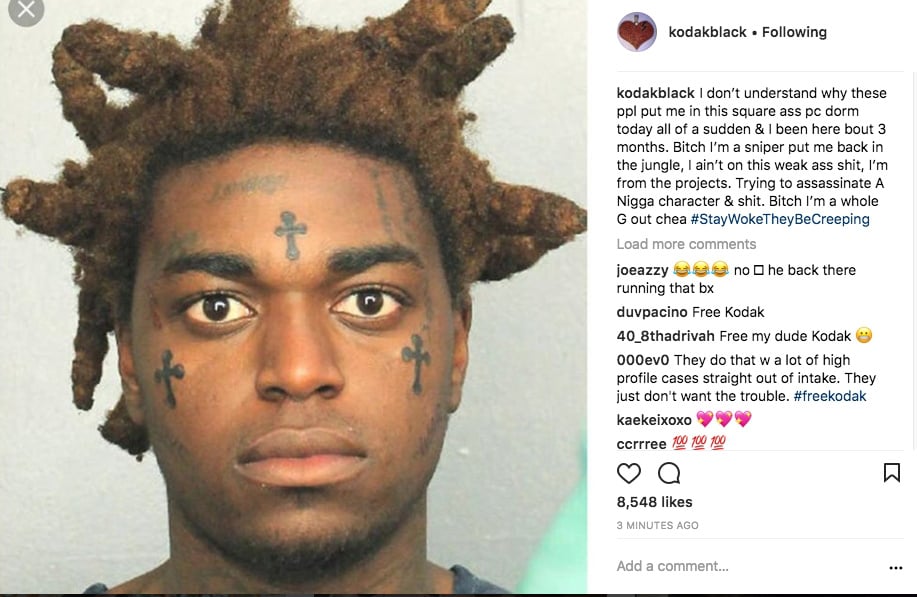 In March, a report emerged about KB getting released from solitary confinement.

Kodak (born Dieuson Octave) and his lawyer objected to the move, and countering that the artist should at least be able to see his tutor and have access to his laptop, which he’s using to study for his GED. Evidently it was decided that Kodak could instead be released early back into the general population, and a prison official confirmed to XXL on Monday that he’s no longer forced into solitude. (XXL Mag)