Fiesta Friday. It’s a day to get festive so why not start it off with Kim Kardashian trashing Karrueche Tran? Ouch. Speaking of anger, did something get Wale unlaced about sneaker sites? With hip-hop still on your mind, is Nicki Minaj upping the ante for the upcoming MTV Europe Awards? All this coming up in SOHH Whatcha Think.

1. Step Your Game Up

Is Kim Kardashian all about the money? Even better, does it take a certain amount of class, fame and bank account balance to rub elbows with her? It appears some of that might be true in regard to Karruche Tran. RadarOnline is on it:

RadarOnline.com can exclusively report that the reality star, 34, threw a diva fit when Chris Brown‘s on-again model girlfriend asked to take a photo with her at a recent event.

Karrueche Tran, 26, requested that they take a group picture together with their men at singer Teyana Taylor‘s listening party in Hollywood this week.

“Kim said absolutely not and turned her down,” an insider tells Radar.

However, when Brown, 25, asked Kardashian’s hubby Kanye West, 37, for permission to take the photo, the rapper happily obliged— leaving his wife with no choice but to participate. (RadarOnline)

Ouch! Would Kim K have played Karrueche like that? Doesn’t everyone know Karrueche is associated with Chris Brown? If this is the case, what about Blac Chyna being one of Kim’s good pals? Isn’t Karrueche bigger than her? #SOHHWhatchaThink?

What’s going on with Wale? Did something go down with him and a certain sneaker site? His Twitter page says it all: 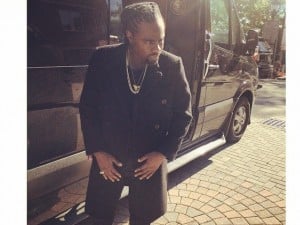 Did Wale have a moment of anger go down? Are sneaker sites taking offense to what Wale said? #SOHHWhatchaThink?

Is Nicki Minaj getting ready to reach a new plateau? With the 2014 MTV Europe Music Awards around the corner and Nicki slated to host it, could she be on the verge of becoming a serious enteratainment mogul? The Wrap is on it:

THE WORLD AFTER NICKI MINAJ ROCKED THE 2014 MTV EMA

Nicki Minaj is taking over the world, quite literally if the new commercial for the 2014 MTV Europe Music Awards is to be believed.

After teasing it on Thursday, the “Anaconda” singer previewed the video Friday morning via her Instagram account, where it quickly went viral. MTV followed that with the official release of the full one-minute commercial. (The Wrap)

Wow! Could this be the best promo we’ve ever seen for Nicki Minaj? #SOHHWhatchaThink?