Months after being involved in a nasty car wreck with daughter North West, celebrity Kim Kardashian has come forward to reflect on the near-death experience.

Reacting to coverage of the February accident on a “Keeping Up With the Kardasians” broadcast last night (May 31), Kim K did not hold back her feelings on social media.

Love this episode!!! This trip was so much fun! Except at the car accident at the end!

I honestly couldn't believe we had car cams on when that happened!!!!! How scary was that seriously!!!!!!!!! I always wear my seat belt now!

I don't even know why I started crying after! Just so happy everyone is ok! Scariest experience of my life!

The crash was so scary & the way it was edited doesn't even do it justice! I keep North out of the show so we had to cut around that footage

But as a mother this as the scariest things that could have happened w your child in the car. Khloe handled it so well!

If u only saw Northie's reaction! As a mom I got protective and left that scary moment out of the episode for her privacy

Check out details from the February accident on the next page…

Details of the accident landed across the Internet last February.

According to TMZ, Khloé Kardashian was driving Kim, North West and Kylie Jenner down a road Saturday morning when a semi-truck drove by their car, leading to snow hitting their front windows. The snow blocked part of Khloé’s view, which ultimately resulted in her car spinning and landing in a ditch. Luckily, cops arrived at the scene and the entire family is doing okay. (TMZ)

Law enforcement almost immediately spoke out on what went down.

“This was not a crash. It’s called a slide-off. It happened because the roads were pretty slick and there were poor driving conditions,” Capt Mark Wilfore told E! News. “There was no damage to their vehicle or any other property. There were no injuries and no citations issued.” (E! Online)

Kim K made sure to alert fans of the family’s condition on Twitter. 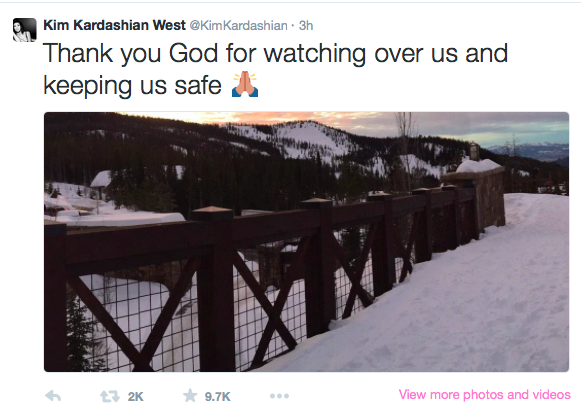