Louisiana rapper Kevin Gates is making headlines this week following a shooting that went down at his concert last weekend in Kentucky.

According to reports, law enforcement is interested in speaking to Gates about the incident.

Cops were called to Gates’ show in Lexington early Sunday morning after shots were fired. One person suffered a non-life threatening wound … and a few others were hurt when part of the audience stampeded for the exit. Law enforcement sources tell us cops think Gates’ position at the time of the shooting — up on the stage — gave him a unique vantage point, and they’re hoping he saw something or someone. (TMZ)

Check out what crazy thing Gates did right here…

Gates appeared to delete all of his Instagram posts and tossed up a few new ones in mid-January. 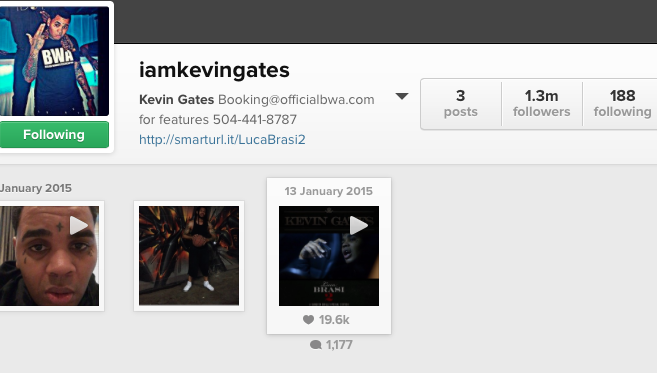 Footage of Gates copping to speculation about him dating a family member landed online earlier this month.

“People be talking about ‘Y’all look like brother and sister.’ Sh*t no. I’m f*cking the sh*t out her, come to find out, she’s my cousin, ya heard me? But, I ain’t ’bout to stop f*cking with her. Sh*t, the p*ssy good.” (YouTube)

According to reports, the relationship went back to the mid-2000’s.

Gates tells TMZ that he began dating a woman in 2006, and after three months, his grandma revealed to him that it was his cousin. Despite finding, they continued dating for nearly two years. He says he doesn’t know if she was a first, second, third cousin or even more remote cousin. (Baller Status)