Top Dawg Entertainment’s Kendrick Lamar and Chris Brown are both reportedly set to show off their on-stage presence with a couple of televised performances.

According to a media press release, K. Dot and Chris Breezy will take center stage during the live June 28 awards ceremony.

Today, BET Networks revealed some of the industry’s most influential names in entertainment who are set to appear at the 15th annual “BET Awards” 2015 on Sunday, June 28, 2015. Hosted by Anthony Anderson and Tracee Ellis Ross, the “BET Awards” will include a performance by Chris Brown and Kendrick Lamar. The star power continues as the network also announced that actor Michael B. Jordan and entertainer Zendaya will take the stage as presenters during the 15th Anniversary of the annual highly-anticipated televised event. (BET Press Release)

New York rapper Azealia Banks dished out her problems with the popular awards show and noted how often fellow rapper Nicki Minaj walked away with a trophy a few weeks ago. 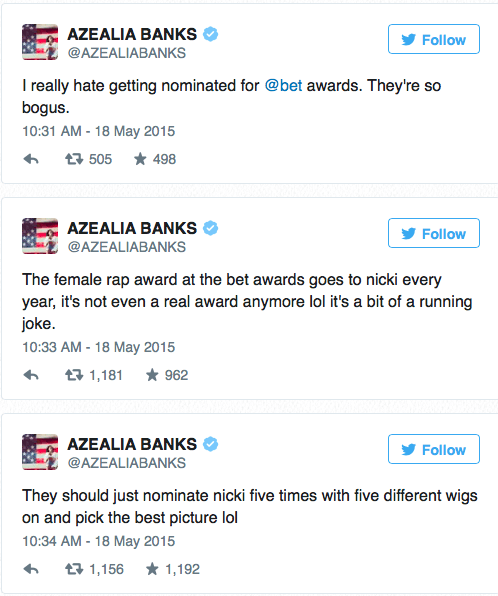 Chris Brown and Nicki Minaj lead with an impressive six nominations. Chris Brown is nominated for ‘Best Male R&B/Pop Artist,’ two separate nods in the ‘Best Collaboration’ category, two nominations in the ‘Video of the Year’ category and the ‘Coca-Cola® Viewers’ Choice Award.’ Nicki Minaj is nominated ‘Best Collaboration,’ ‘Best Female Hip Hop Artist,’ ‘Video of the Year,’ two nominations for ‘Coca-Cola® Viewers’ Choice Award’ and ‘Best Group’ as a member of Young Money. Beyoncé and Lil Wayne round it out with four nominations each. This year also marks a special milestone for the “BET Awards” as it celebrates its 15th anniversary live from the Nokia Theatre, Sunday, June 28, 2015. (Press Release)

Lil Wayne started his performance with a live debut of his new “Tha Carter V” single, “Krazy.” John Legend stayed put behind his piano, as he introduced Jhene Aiko to the stage to perform “The Worst.” For the first time since released from jail (after a four month stint), Chris Brown performed his hit, “Loyal,” alongside Lil Wayne and Tyga. Minutes after closing his set with Travis Barker behind the drums, Breezy dropped his new single, “New Flame,” featuring Usher and Rick Ross. (Billboard)