Model Karrueche Tran recently delved into her past relationship with celebrity boyfriend Chris Brown and explained the impact of their publicized split.

According to Tran, she no longer has an intimate or friendly relationship with Breezy.

Karrueche says she’s no longer in contact with Chris Brown, and adds “we’re not friends or anything like that at this point”. … “A lot of people think I am a weak individual because of past situations and when it comes to business sometimes people don’t want to be involved with somebody like that. Which is understandable, but it sucks, because I’m not a weak person.” (BBC)

In June, Chris fired off some shots toward Tran for discussing him in an interview.

#ChrisBrown stepped into #TheShadeRoom and set it off! #Karrueche #AccessHollywood 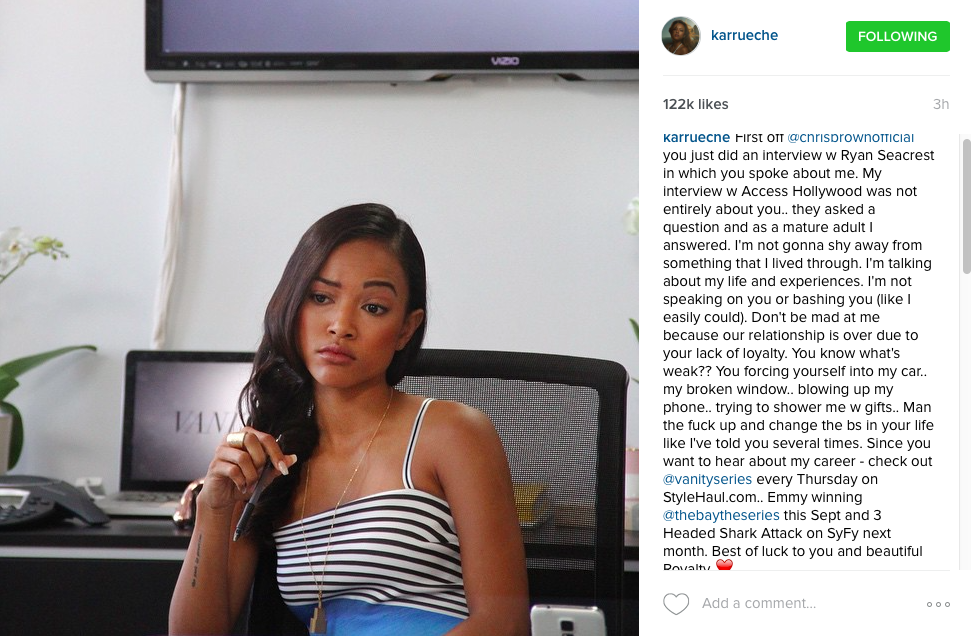 Recently, Breezy came clean on his status with Karrueche.

“I’m going to be honest and be a man about it and just take it one day at a time. I can’t promise anything and I can’t jump over the moon, but it takes time for all wounds – I take full responsibility for my actions and things that I’ve done in the past. I feel like it’s just a time thing – I’m not a hateful person. Of course I still love her, but mentally right now, I think everything takes time. I just need to focus on being the best father I can be.” (“On Air with Ryan Seacrest”)