Grammy-winning rapper Kanye West is ready for a worldwide takeover. Yeezy has announced plans for over 20 “Pablo” pop-up stores to open across the globe this coming weekend. 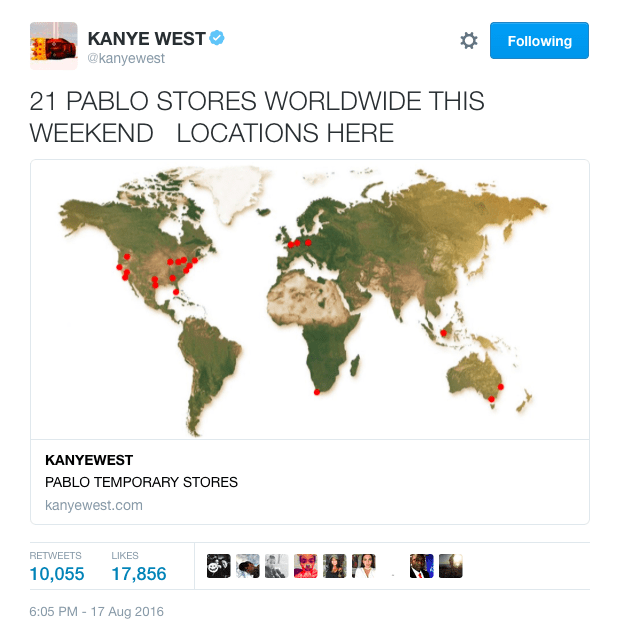 Some media outlets claim the pop-ups will open Friday (August 19).

And with 21 temporary Pablo stores set to open across the globe on August 19, Kanye West is set to take that idea to the world stage. It’s fair to say that West was among the first to blow up merch in a big way—he opened a pop-up in New York to coincide with the Yeezus tour back in 2013. Located on the Bowery—a short subway ride from the Barclays Center where he performed—the store was filled with T-shirts, beach towels, stickers, and hats featuring macabre skull motifs from artist Wes Lang. (Vogue)

Kanye West is to hold his Yeezy Season 4 fashion show on September 7. West‘s representative confirmed that the show will be held in the afternoon on the first day of New York Fashion Week, but said that the event’s time and place will be announced at a later date. (WWD)

Back in February, Kanye blew fans away with his star-studded Yeezy Season 3 NYC rollout.