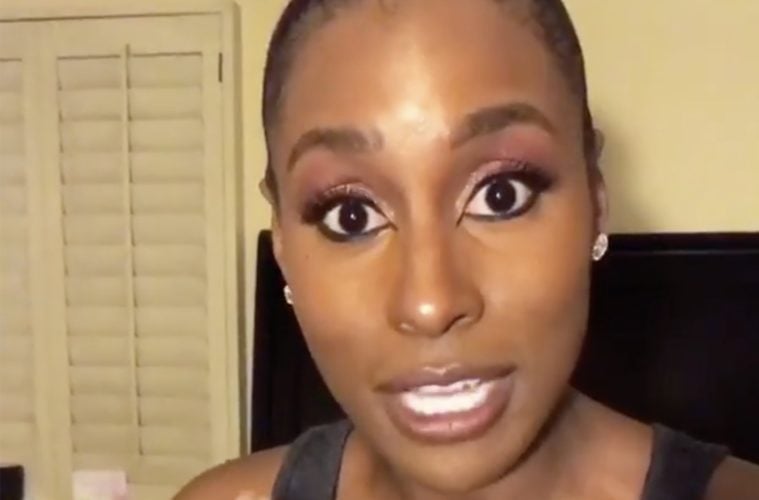 Turnt Tuesday. It’s a day to get fully turnt up SOHH why not get things going with Kanye West low-key relying on Drake for his Ye album? Speaking of Kanye, did “Insecure” star Issa Rae give him that verbal work with a memorable lashing? On a more serious note, is it really R.I.P. for fashion icon Kate Spade?

Did Kanye West quietly work with Drake for his new Ye album? You’d think with only seven tracks on the entire project it wouldn’t have too much outside involvement outside of features – but turns out Drake might have actually put in some work on the “Yikes” anthem – notably one of the first songs on the project? Hot 97 is on it:

Do you think this is true? Should Drake bring this up? Will Kanye West thank him publicly? #SOHHWhatchaThink?

It wasn’t too long ago when the entire rap game felt like boycotting Kanye West. A few weeks later, some deleted Twitter posts and 7-track Ye album – is all forgotten? Turns out HBO star Issa Rae made sure to throw a little fire on Yeezy at last night’s CFDA Awards show during her hosting duties. USA Today is on it:

Hosted the #CFDAAwards last night and couldn't have done it without my #GlamGang! Thank you, @jasonrembert for fits by all black designers. Thank you, @joannasimkin for beating my tired face to life. (❤: @covergirl) Thank you, @lovingyourhair for your infinite encyclopedia of hairstyles. Thank you, @erierilady for hooking up my nails. Special thank you to @nfrothwell for loaning me your funny last night.

Issa Rae was only on stage for a few minutes at Monday night’s CFDA Awards, where she served as the host of the evening’s prestigious fashion awards show. But she made the time count, delivering an opening monologue that skewered Kanye West and his recent comments calling slavery a “choice.” “I’m about as fashionable as Kanye is black. Only when it’s convenient,” she said. “That joke was my choice, just like slavery.” (USA Today)

It feels like hip-hop has never been as present in the fashion world as in 2018. Whether it’s attending the Met Gala or putting out luxury releases or getting hired at Louis Vuitton, hip-hop is getting that look and the fashion world is embracing it. But just as things excel, a true iconic designer in Kate Spade has left the world at the age of 55. NBC News is on it:

Fashion designer Kate Spade has been found dead at her apartment in New York. Police say her body was found by housekeeping staff, and she'd left a note. The 55 year old is best known for her handbags. #CapitalReports pic.twitter.com/sZhfIBeDPh

Fashion icon Kate Spade has been found dead of an apparent suicide in her Manhattan home, law enforcement sources tell News 4. She was 55. A staff member found Spade hanged from a scarf on a bedroom door at her Park Avenue residence Tuesday morning, a senior law enforcement official and other law enforcement sources say. Born in Kansas City, Missouri, Spade leaves behind her husband of 24 years, Andy, and a daughter, Frances Beatrix Spade. Her company, Kate Spade New York, has more than 140 retail shops and outlet stores across the country, as well as more than 175 stores internationally. (NBC New York)