Grammy-winning rapper Kanye West reportedly packed his bags and headed out to Scotland for production of a The Life Of Pablo song.

According to reports, Yeezy traveled overseas to put together a “Waves” music video.

RAPPER Kanye West has been described as the “perfect guest” after he checked out of a country hotel on the Isle of Skye. It is understood he was on the island to record a video promoting his new single Waves. The star and his entourage stayed at Skeabost House Hotel on Sunday night, taking half of the venue’s 14 rooms. (Daily Record)

Check out where Kanye West performed his T.L.O.P. album live for the first time on the next page…

Ye performed his The Life Of Pablo album for the first time during an overseas Philippines show last weekend.

Among the songs ‘Ye live-debuted off his chart-topping album was “Famous.” While performing for the crowd at Paradise Grounds, he paused for the controversial Taylor Swift lyrics, allowing the Manila crowd to recite the line in unison. (Rap-Up)

Yeezy boasted about his The Life Of Pablo killing its competition on the music charts this weekend. 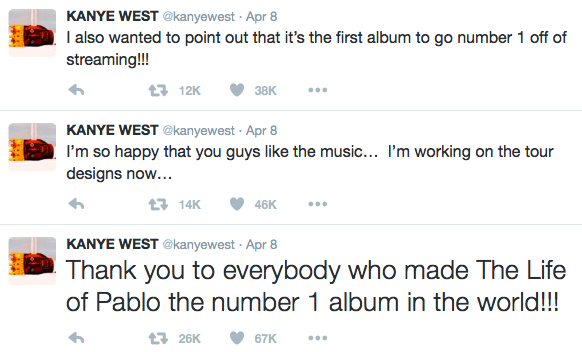 There were some paid album downloads for The Life of Pablo from the G.O.O.D/Def Jam star’s own website, but the overwhelming majority of the 90k+ earned came from streaming services, including Apple Music, Spotify and Tidal. This unprecedented strategy was crafted with Kanye by new manager Scooter Braun, Steve Bartels and Team Def Jam. (HDD)