Grammy-winning rapper Kanye West made sure to honor late hip-hop icon Phife Dawg during a memorial speech this week in New York City.

Joining a star-studded list of hip-hop speakers, Yeezy delivered an eight-minute speech on Phife’s impact on his life.

“[A Tribe Called Quest’s] Low End Theory was the first album I ever bought and I stayed in the suburbs of Chicago with my stepfather, my mama, it was her boyfriend, I called him my stepfather. I’d always get into trouble listening to music during the week and I had to go to detention or study hall, whatever they called it but I enjoyed it because I had that Tribe tape. It didn’t really matter how long that walk was.” (YouTube)

Watch Kanye West’s speech on the next page…

While discussing Tribe’s influence, André 3000 revealed during his speech that A Tribe Called Quest and Outkast were discussing doing an album together in recent years. (Pitchfork)

The song’s video, debuted at last night’s Celebration of Phife at the Apollo Theater in Harlem, also features testimony from rappers like Rakim, Redman, and De La Soul’s Posdnuous, talking about the legendary rapper and what he meant to them. (SPIN)

Kanye made sure to also pay homage to Phife on Twitter yesterday (April 5). 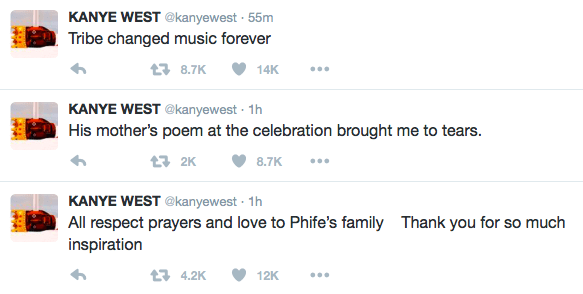