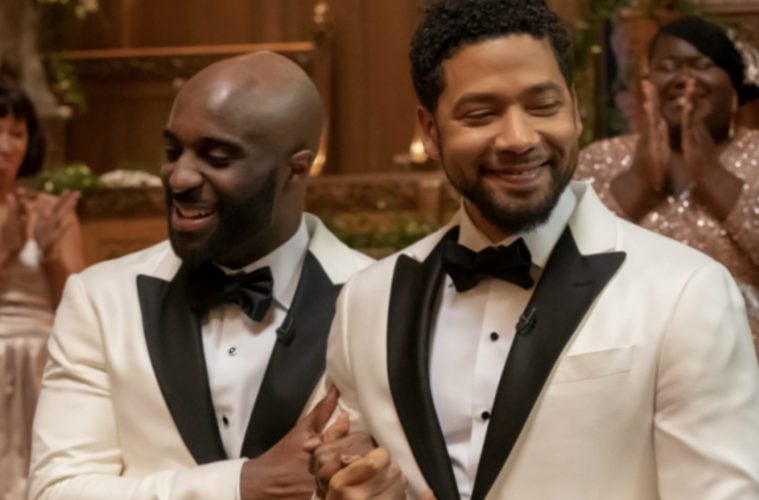 Jussie Smollett’s final episode of “Empire” season 5, and potentially his last episode on the show ever, went up in the ratings from previous weeks, but still posted low figures for the series. The episode, in which Smollett’s character Jamal Lyon tied the knot in TV’s first-ever black, gay wedding, returned a 1.1 rating in the key 18-49 demo and 3.8 million total viewers. Those numbers are a tick up on the 1.07 rating of the previous two weeks, but are still down on the season 5 average, which currently sits at around 1.4. (Variety)

This season, the show has experienced a series low in ratings.

CBS’ Survivor: Edge of Extinction (1.4 rating in adults 18-49, 7.36M viewers) was Wednesday’s highest-rated show in the demo, besting Fox’s Empire (1.1, 3.8M) at 8 PM.The Jamal-wedding episode of Empire held steady at its series demo low for a fourth time in five weeks. Empire’s showing in the key age bracket for actor Jussie Smollett’s final appearance on the show this season — and possibly its series run — allowed NBC’s Chicago Fire (1.1, 8.01M) to tie it as the night’s No. 2 show in that metric; Fire led the night in total viewers. (Deadline)

This week, Jussie’s sister Jurnee Smollett hit up Instagram with some emotional words about his character getting married to another man on primetime TV.

According to reports, “Empire” stars Terrence Howard and Taraji P. Henson joined other cast members in requesting Smollett to return for their sixth season.

Henson, Howard, and the rest of the drama series’ top cast, penned an April 19 letter to Fox Entertainment CEO Charlie Collier, Disney TV Studios and ABC Entertainment chair Dana Walden, Fox Entertainment president Michael Thorn, Empire co-creators Lee Daniels and Danny Strong, and other executive producers on the series, Varietyconfirmed. “Together, as a united front, we stand with Jussie Smollett and ask that our co-star, brother and friend be brought back for our sixth season of Empire,” read the letter, obtained by Deadline. It is signed by Bryshere Y. Gray, Trai Byers, Gabourey Sidibe, Nicole Ari Parker, and others. (Variety)