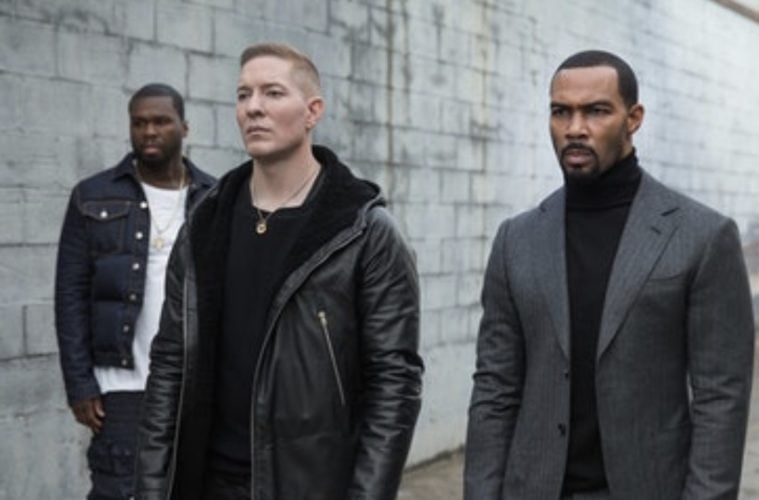 With “Power” season six literally right around the corner, one of the show’s biggest stars – Joseph “Tommy” Sikora – chops it up with SOHH to discuss his top five WTF moments from a jam-packed season five – which is currently available on Digital HD and Blu-ray/DVD! [Peep each reason and enter to win your own copy!]

Sammy was a big death for me, too. When my father killed him. Let’s not forget, he killed his best friend in that same episode. 509 was a big, big episode.

We have to include Diego’s head. The leader of the Mexican cartel. Kanan somehow comes up with his head – if you remember him saying, “Hey, I got his head in a cooler. You guys want it?”

The whole Kanan death was tough. I remember shooting that. We shot that at a real morgue on the Upper East Side here in Manhattan and it was heavy. It’s heavy in a lot of ways. I kept thinking, “What was 50 Cent thinking when he shot that scene of himself still getting shot just about 9 times?” And this time dying. That’s heavy work. But as the characters, Tommy and Ghost, are going to see Kanan’s body, I think they dealt with it in very different ways. Tommy keeps his emotions a little more closer to his chest and then we see Omari Hardwick, who brilliantly plays Ghost, be a little bit more emotional. At least outwardly emotional, he was more upset and near tears. Where Tommy was more a little remiss about the situation saying, “Rest in peace you tough bastard.” I think that Kanan’s death – with Tommy – it’s a huge loss and at some time he’s going to grapple with and continue to grapple with into season six definitively. If Tommy was a soup, he would be probably about 50 percent Ghost, 20 percent Kanan, 20 percent Breeze and 10 percent his mother. But still, Kanan’s such a significant part of his life and I think Tommy’s street actions and how he handles business is probably closer to Kanan’s – so I think in season 6, as Ghost becomes further and further estranged from the game, we’ll see Tommy kind of take over a more strategic style of playing the game.

Tariq’s turned into Ghost in a way that’s even a little more treacherous than Ghost because he’s had it without a lot of the consequence and a lot of the street work. He’s been kind of bumped up to the top. It’s a little like Donald Trump Jr. Just kind of being given [everything]. He was just kind of given all of this stuff. There’s a lot of danger in privilege and sophomoric knowledge in Tariq right now. He thinks he knows more than he does and I think that’s often the downfall of someone who knows about stuff but not enough. I think we’re going to have to see him take a bit of a journey by himself into this world that he’s already breached even despite the advice of his father and his uncle and mother have been against it. Tommy has always been the most open to him about letting him know how things work. The intelligence of Ghost has not made the generational gap but been passed down from father to son and that’s going to be his strongest factor. The strongest thing he has is his intelligence.

People forget for whatever reason or they don’t want to believe it, but Tommy was aiming for Ghost. But we all know that Tommy is a good enough shot. We’ve seen him kill a guy off of a roof from even higher than that with a single shot. So we’ve established that Tommy could kill Ghost from that distance at that time. So was it a bad shot? I’d say it’s deeper than that. I think something inside of Tommy didn’t want to kill Ghost and then Angela, very poetically and done by Courtney A. Kemp who wrote the finale as well, she kind of showed you on the screen what happens when somebody gets between Tommy and Ghost. She actually physically shows that. Conceptually, it’s dangerous to do and then that theory made physical and manifested is what happened at the culmination of the season. What we didn’t see much in the final scene is Tommy’s struggle to even raise the gun and do it even though he’s going to do it. So I don’t think it was a great shot and then Angela got herself in-between Ghost and a bullet in the chest.