R&B singer Jordin Sparks is looking at the brighter side of life after a publicized split from fellow crooner Sage The Gemini earlier this month. 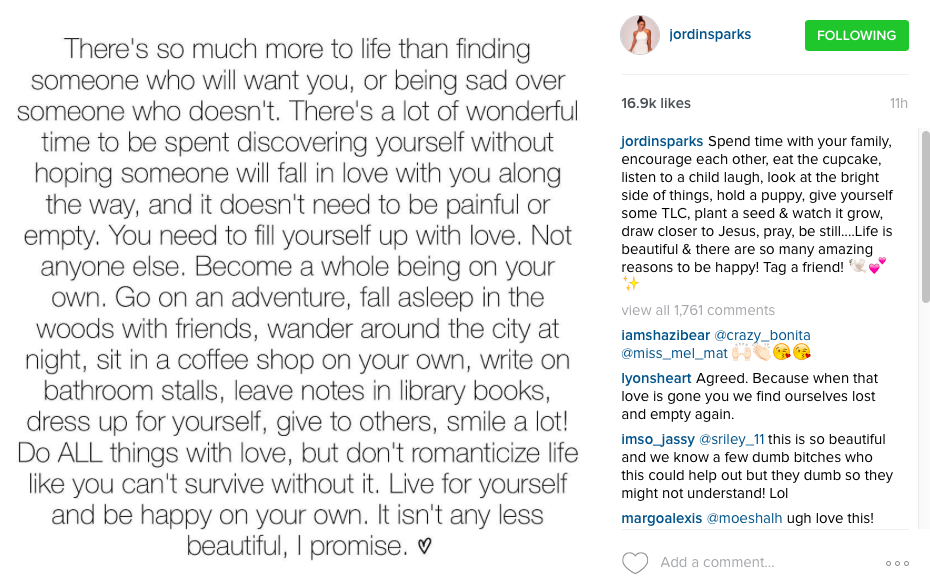 This week, Sage’s ex-fiancée Curium leaked a private phone conversation where he called his relationship with Sparks a publicity stunt.

“I can put that on my motherf*cking daughter,” Gemini said in the phone conversation. “That sh*t was fake or whatever. Really what I was doing was calling you, I haven’t heard your voice in a really long time. I wanted to call to let you know I miss you like that. All the sh*t went South. … Those are pictures [of me and Jordin]. Everything was f*cking horrible – I wanted to stab her. Don’t get me wrong, she cool – but she’s not no regular person. I can’t call her like, ‘Hey, I want to go pick you up. I had a bad dream, I want you to stay next to me. I can’t do that. But everybody on the outside looking in, ‘Ah yeah, they’re hella perfect.’ … Remember I deleted my Instagram once, then my manager was like ‘No, bring it back. How is your album going to sell? How are you going to put an album out?’ … Now publicists were meeting with publicists because her album was coming out and then my album was finna come out – the next day, when they post that, all of a sudden, I get a text from you and I’m saying, ‘What is you talking about?’ … I didn’t find out because I wasn’t going on my Instagram and I didn’t find out until later.” (YouTube)

After penning a long note to Sparks on Instagram, Sage released his new “I’ll Keep Loving You” song a few days ago.

After that, the MC posted a new song affirming his commitment on SoundCloud. Tell your ex-boyfriend that you’re gone, he sings. Someone loves you more than before/ I know you’ve been hurt before, none of that don’t matter no more. Later he adds, every time we break up, I can’t even sleep at night. P-Lo and Mark Nilan Jr. produced the track. (The FADER)

Sage penned an emotionally-driven note to Sparks on his Instagram page last week.