Forner Interscope Records CEO Jimmy Iovine has stepped up to speak out on seeing his co-founded Beats By Dre headphones receiving a widespread ban from the National Football League (NFL).

Instead of showing frustrations, Iovine laughed at the publicized ban.

“We didn’t do anything, and now the players are going out and putting black tape on our logo,” Iovine said during a talk at University of Southern California’s Global Conversation. “It’s like, I can’t believe I’m this lucky,” he said, laughing. “I feel like sending them the tape.” (Business Insider)

Iovine also considered what most likely sparked the ban.

And while his headphones were bright pink, purportedly to pay homage to Breast Cancer Awareness, Kaepernick paid for the indiscretion. He said Thursday the league fined him $10,000. So did Beats, with whom he has an endorsement deal, pay his fine? “I’m going to let that be unanswered,” Kaepernick said. (ESPN) 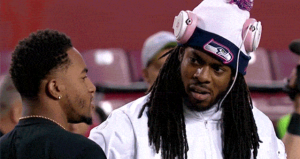 According to reports, the league’s deal with headphones competitor Bose motivated its decision to issue a ban.