R&B singer Jeremih has stepped forward to provide some clarity. The crooner explained footage of himself storming off a Chicago concert stage. 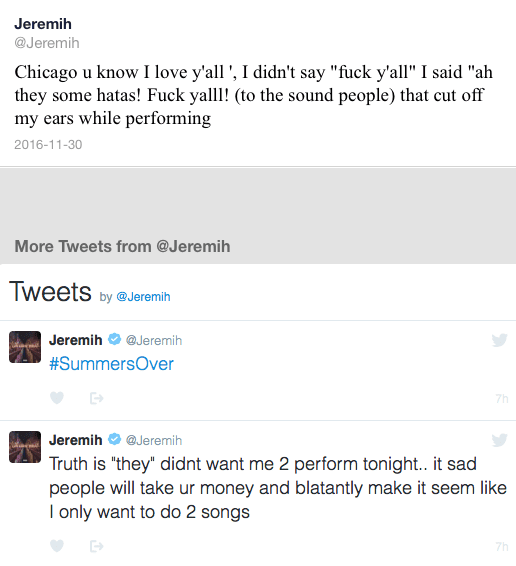 Yikes Chicago fans are apparently pissed at #Jeremih after he apparently threw a fit saying "F*ck this" before dropping his mic and ending his segment with only three songs in. He is currently on tour with #PartyNextDoor… we will keep you posted on this story

#PressPlay: A roommate sent us footage of #Jeremih throwing his mic before storming off stage at his Chicago show … it sounded like he said "They some haters man f*ck y'all" (view previous post)

“Can I tell everybody something? To all my fans that’s in LA right now listening to 92.3, new album is coming out with PartyNextDoor called Late Night Party. Y’all finna get that real soon and right after that you’re going to get the trilogy to Late Nights called Later That Night.”