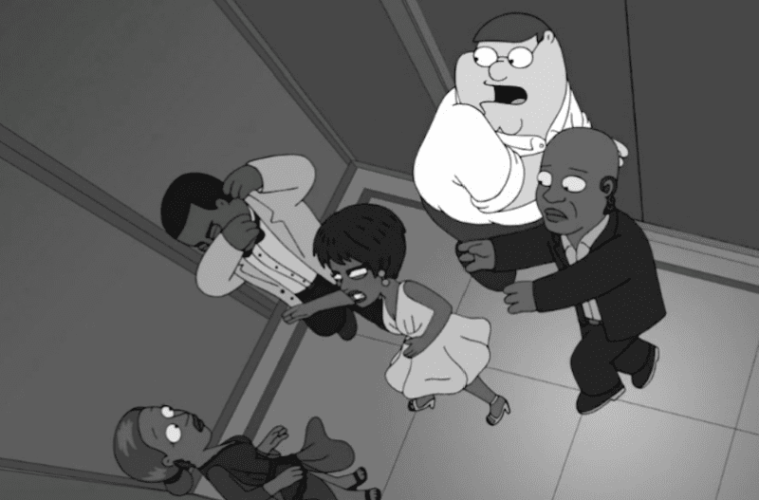 To set up the gag, Peter tells wife Lois that he knows what can happen when people hold in their aggression too long. In a kooky revisionist look that somewhat replicates the overhead black-and-white security footage, Peter is onboard the hotel lift with the principals in the family drama. He says he just wants to go to the second floor business center to print out his boarding pass. Then he witnesses a seething Solange flail away at Jay Z while Beyonce watches. (Huffington Post)

A couple years ago, Solange’s dad Matthew Knowles suggested the incident may have been staged.

Mathew Knowles thinks the Beyonce/Jay Z divorce rumors … and even the infamous Solange elevator fight video … were both carefully orchestrated by the duo to drive up ticket sales. Beyonce’s dad was on KRBE in Houston where he theorized all the recent turmoil around the couple was simply a “Jedi mind trick” they orchestrated as a way to make their summer tour super popular. He explained, “All I know is the Jedi mind trick. Everyone’s talking about it. Ticket sales went up. Solange’s album sales went up 200%!” (TMZ)

Jay’s wife Beyoncé addressed the attack on her “Flawless” remix.

The standout line is Beyonce’s declaration, “Of course sometimes shit goes down when there’s a billion dollars on an elevator,” a once-and-for-all ending on that infamous elevator tussle between Jay Z and Solange. (Hollywood Reporter)

Despite the speculation and widespread rumors, Solange recently said the incident was behind her.

Family is a centering force for Knowles–and she speaks of wanting to expand hers once the new album is finished. The day we’re talking in the park is two weeks after TMZ published a leaked elevator video of Knowles getting into an altercation with brother-in-law Jay Z the night of the Met ball at the Standard Hotel. It’s a subject she expects in conversation but one she doesn’t want to focus on. She calls the incident “that thing.” “What’s important is that my family and I are all good,” she says. “What we had to say collectively was in the statement that we put out, and we all feel at peace with that.” (Lucky Mag)