Music mogul Jay Z is showing fans he’s much more than a substantial supporter of streaming service Tidal and showed off his own personal playlist Monday (June 1).

Jigga Man made a rare Twitter appearance at the start of the week to show off his playlist.

Playlist wars in the Carter house getting too real. http://t.co/se3HbGTVSX 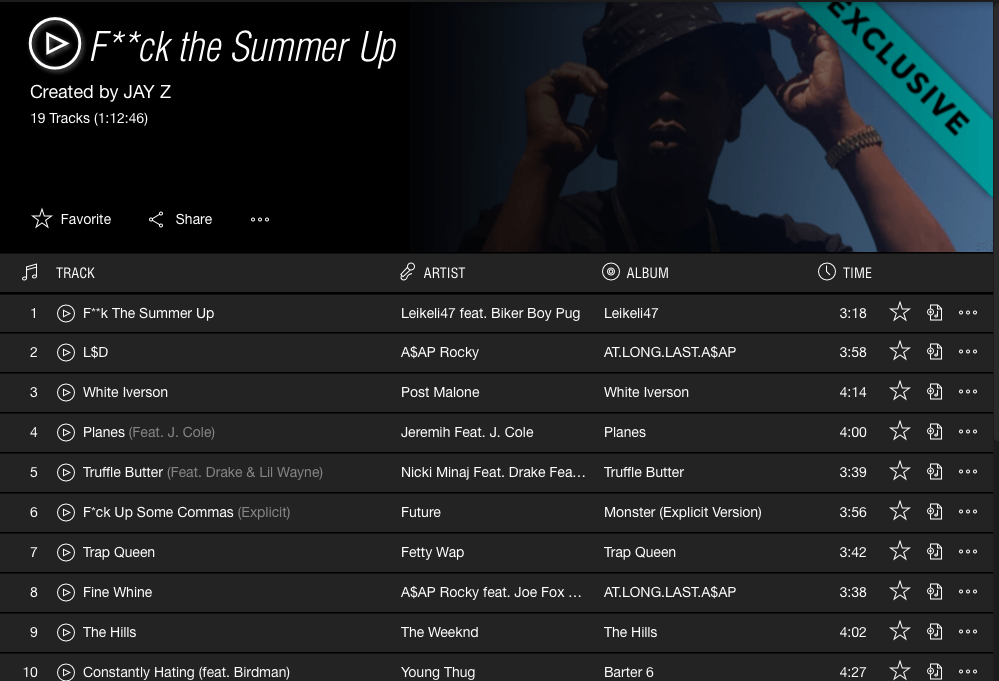 Contrary to reports, Sony Music has no plans to pull Beyoncé – or any other artists under their umbrella – from Jay Z’s Tidal streaming service. “Jay-Z is a friend and business associate for many years. I have always admired his business acumen, his entrepreneurship and his passion for music,” Sony Music CEO Doug Morris said in a statement. “All of our content, including Beyoncé, is available through the Tidal service, and we have announced no plans to remove our catalog from Tidal. Like all of our other partners, we are rooting for Jay and Tidal to succeed.” (Rolling Stone)

Initial reports claimed Bey’s record company Sony and other powerhouses like Warner had asked Tidal for advances in exchange for streaming its artists’ tunes.

Nonetheless, if Jay Z can’t come up with the cash for Sony, he faces the possibility that Tidal might lose albums from some of its co-owners, most painfully Beyoncé, a Sony artist. “I’m pretty sure most of the artists that were at the press conference don’t control their own streaming rights,” says Peter Mensch, co-founder of Q Prime, the talent agency that manages the Red Hot Chili Peppers and Metallica. (Bloomberg Business)

To keep his company from becoming a money pit, Jay Z also needs to line up many more Tidal subscribers. Tidal claims to have 900,000 users, but analysts suspect many have signed up for trials and will cancel when they have to start paying. Early on, Jay Z called some of his customers to see how they liked Tidal—a humbling act for a guy who calls himself J Hova (as in Jehovah). Tidal also hasn’t denied rumors that he will release a long-awaited album with Beyoncé exclusively on the service. (Bloomberg)