Music mogul Jay Z‘s TIDAL is getting ready to put a chokehold on its competition with a monster partnership with mobile giant Sprint.

According to a press release, Sprint will now acquire 33 percent of the growing streaming platform allowing TIDAL to reach its 45 million customer base.

TIDAL and its artists will make exclusive content that will only be available to current and new Sprint customers. JAY Z and the artist-owners will continue to run TIDAL’s artist-centric service as it pioneers and grows the direct relationship between artists and fans. The formidable pairing of Sprint and TIDAL will grow customers on both platforms by offering exclusive access for customers who subscribe to TIDAL. Sprint’s chief executive officer, Marcelo Claure, will also join TIDAL’s Board of Directors. (Press Release)

Young Hov has issued a statement to confirm the deal and detail its significance.

“Sprint shares our view of revolutionizing the creative industry to allow artists to connect directly with their fans and reach their fullest, shared potential,” said JAY Z. “Marcelo understood our goal right away and together we are excited to bring Sprint’s 45 million customers an unmatched entertainment experience.”

Apple’s appetite for acquiring music streaming services, and the agonies and ecstasies that come along with them, has apparently been satisfied. Squelching reports that have persisted since June, a member of Apple Music’s senior leadership said the company has no current plans to acquire Jay Z’s Tidal or any other rivals. “We’re really running our own race,” Jimmy Iovine, who heads Apple Music, told BuzzFeed News in an interview. “We’re not looking to acquire any streaming services.” (Buzz Feed)

Back in July, TIDAL owner Kanye West went on a mini-Twitter tirade and suggested Apple Music should work with Jay Z. 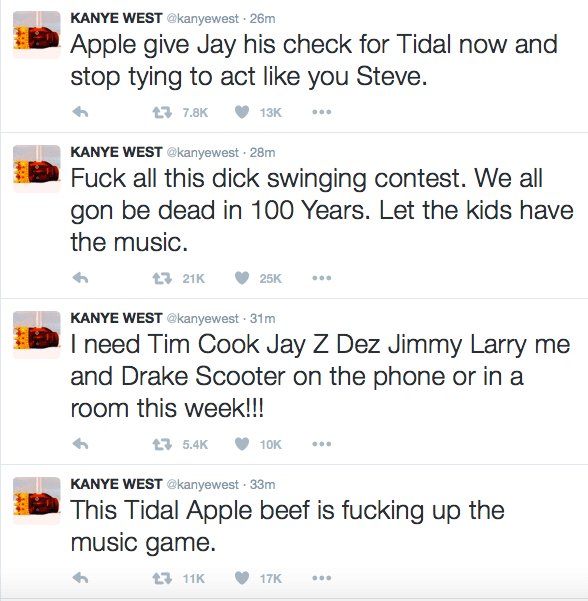