New York rap veteran Nas has come through in the clutch to wish President Barack Obama a happy 55th birthday this week.

Nasty Nas went to Instagram right before midnight Thursday (August 4) to get his birthday wishes in for the head of state. 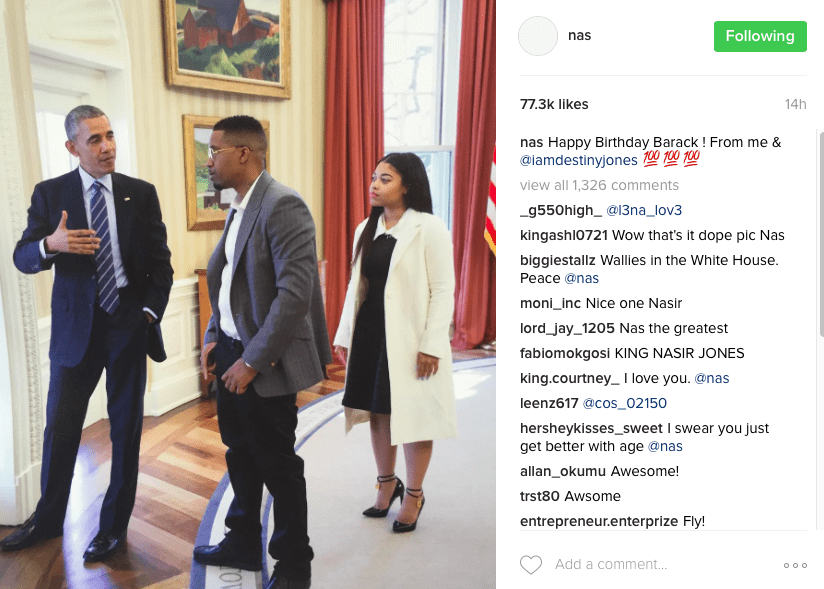 Multiple sources confirmed to Page Six that first lady Michelle Obama is throwing a top-secret bash for the president to celebrate his last birthday at the White House. We’re told that a host of stars will attend, including Usher, who is expected to perform, as well as Obama’s favorite rapper Kendrick Lamar. (Page Six)

In late 2015, Kendrick reacted to President Obama calling his “How Much a Dollar Cost” one of his favorite songs of the year.

“It feels great man. Help as many people as you can, man. You’re not going to live forever.” (TMZ)

In an exclusive interview with PEOPLE for a Campaign 2016 special feature in this week’s magazine, Michelle reveals she can’t get enough of “Uptown Funk” by Bruno Mars, while her husband says he’s all about Kendrick Lamar’s “How Much a Dollar Cost.” (People)

In 2012, Jay Z explained why he supported President Obama.

Still Jay whole-heartedly supports the President and even aided in his reelection campaign by throwing a fundraiser which brought in $4 million to the Obama camp on September 18. “I support Barack because I gotta respect that sort of vision. I gotta respect a man who is the first black President ever,” he said. “To have that sort of vision and dream, I have to support that.” (MTV)