Jay Electronica To “Breakfast Club”: “Make Sure You Put Some Respek On Birdman Name!”

Jay Elect poked fun at what went down and offered up some suggestions to the New York radio show’s hosts on Twitter this past weekend. 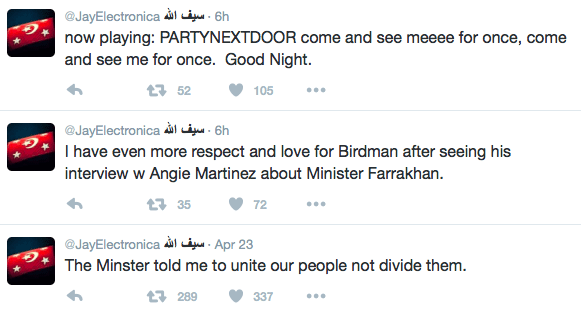 Check out more hip-hop reactions on the next page… “Charlamagne, you gonna make n*ggas torture you, boy,” Thugger said in a new video. “Told you p*ssy. Gonna beat the f*ck outta you. We’re gonna beat that f*ck n*gga up.”

According to reports, Birdman has already reached out to co-host DJ Envy to apologize.

11:07 AM PT — Sources tell TMZ Birdman has apologized to DJ Envy since the incident this morning. (TMZ)