Australian rapper Iggy Azalea is fading to blonde these days. The hip-hop heavyweight went online to share some new shots of herself dressed in all-black and showing off long bright hair. @sohh @sohhdotcom
2k Views Comments Off on Iggy Azalea Is Back On Her Modeling Goals After Big Son Reveal: “Keeping Things Simple”
Share

On Tuesday, the hip-hop entertainer returned to Instagram with some must-like content. The shots feature Iggy Azalea displaying modeling goals by rocking shades and showing off her physique.

Last Thursday, Azalea went to her Instagram Story and confirmed she has a son. While she didn’t name the father, Iggy did say she’d been keeping her mini-me’s life private.

Comments Off on Iggy Azalea Is Back On Her Modeling Goals After Big Son Reveal: “Keeping Things Simple” 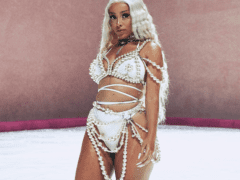