Empire: Top 5 Best Moments Of “A Rose by Any Other Name”

[With Fox’s “Empire” back for the latter part of season 2, we’re giving you our personal picks of the top 5 moments from Empire’s “A Rose by Any Other Name” episode.] 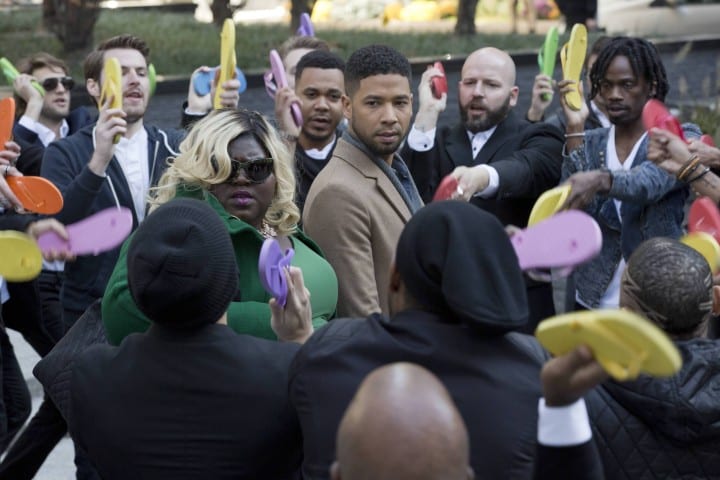 Thanks to Lucious, Jamal’s affair with Skye Summers (Alicia Keys) has now become public knowledge, hurting Jamal’s gay fan base. While walking outside with his assistant, Jamal is flash mobbed by a group of dancing gay protestors who shower flip-flops on him as a finale. You have to see it. The Return Of Season 1 Rhonda

Rhonda was on her deathbed before the push down the steps. Whatever happened to “Baby Bib” Rhonda? What happened to Rhonda allowing her husband to sleep with other women Rhonda? Well, that Rhonda is making her way back. In tonight’s episode, Rhonda goes back to work for the Empire, while there she overhears a heated phone conversation between Mimi and Camilla which she tells Cookie. Hopefully, we will see more of go-getter Rhonda in the future. Sometimes mother’s can say the wrong things and then there’s Cookie. Throughout the episode, we see that Andre is back sliding to his old crazy ways and he needs to get back on his meds. Andre has been slipping at work and suddenly paranoid that Rhonda is cheating on him. Cookie calling her first born crazy just made things worst. Hakeem Is The Brand

It was a brief moment but it goes to show you just how fast success has gone to Hakeem’s head. He has replaced the logo of Lucious Lyon with himself. Lucious catches Camilla on videotape killing her partner/spouse, Mimi Whiteman and threatens to use it against her. Lucious threatens to kill Camilla and make it look like a double homicide, but he does something even better. Since he knows that Camilla poisoned the drink that killed Mimi, he forces Camilla to drink it at gun point essentially making her kill herself. We don’t see Camilla